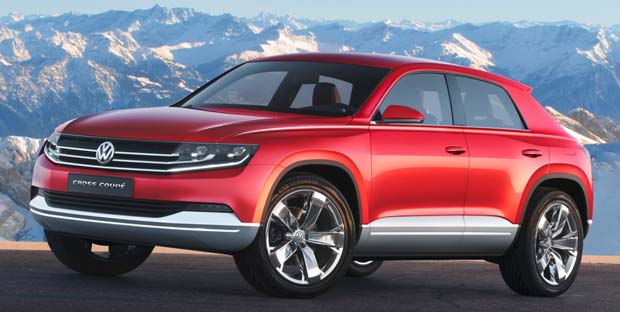 This is the updated version of the Volkswagen’s Cross Coupe Plug-in Hybrid Concept that is set to debut at the 2012 Geneva Motor Show next week.

The Volkswagen Cross Coupe was previously shown at the Tokyo Motor Show last year, powered with a gasoline-electric hybrid powertrain that incorporated a four-cylinder gasoline engine and two electric motors.

The Cross Coupe TDI Plug-in Hybrid concept is a small all-wheel drive crossover that uses an even more fuel efficient diesel engine in partnership with electric motors coupled to a seven-speed dual-clutch transmission.

While on the road, the driver can choose from a total of five driving modes: City (ECO mode with minimal fuel consumption); Sport (high dynamic performance); Off road (continuous all-wheel-drive); E-mode (pure electric drive); and Charging (via the TDI engine). Depending on which mode is selected, different powertrains and axles are operated.

VW says the Cross Coupe TDI Plug-in Hybrid sprints from 0 to 60mph in 6.5 seconds, faster than the gasoline/electric version, with a maximum speed of 75 mph.

Plug-in charging is accomplished via an external 230-volt power source. Pure-electric range is about 28 miles with a maximum speed of 75 mph. A Cross Coupe with a fully charged battery and a fresh tank of fuel is theoretically good for an overall range of 800 miles.

Further information about the Cross Coupe will be available when it makes its debut at the Geneva Motor Show on Tuesday 6 March.