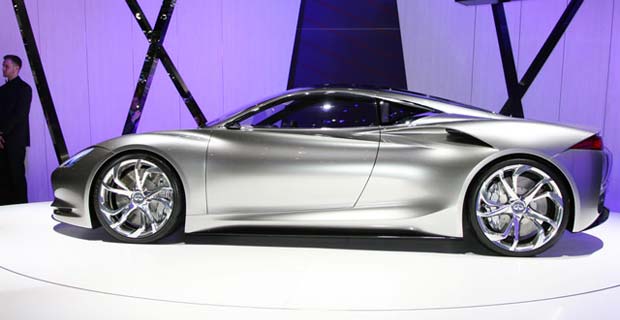 The INFINITI EMERG-E Concept, which makes its debut at the 2012 Geneva Motor Show, is a highly advanced, mid-ship sports car that provides an exciting glimpse into Infiniti’s future.

INFINITI EMERG-E is the ultimate expression of Infiniti’s inspired performance. The EMERG-E is a range-extender electric vehicle, and it is propelled at all times by a pair of 201bhp (150kW) EVO ELECTRIC motors driving the rear wheels. These advanced motors direct their power via a single speed (XTRAC) transmission to create what is effectively an open differential, this arrangement significantly reducing driveline friction losses. A quartet of inverters controls the motors and their energy regeneration role under braking, the recovered power directed to a lithium-ion battery mounted behind the seats. The battery can be recharged from a mains power supply (domestic and fast-charge) and stores sufficient energy to propel the INFINITI EMERG-E for 30 urban miles, at which point the on-board petrol engine starts up to act as a generator. This light, ultra-compact, Lotus-engineered three-cylinder 1.2-liter35kW engine has been purpose-designed for its range-extending role. It operates between crank speeds of 1500-4000 rpm, producing peak power at only 3500 rpm.

This 402bhp (300kW) mid-engined, twin motor, electric motors-powered sports car is capable of accelerating from 0-60 mph in just four seconds – and from zero to 130 mph in a single, seamless 30-second burst. Yet it also operates as exciting, zero emission urban transport over a 30-mile range. And when the range-extender gasoline engine functions in concert with its twin electric motors, it produces a CO2 output of only 55g/km (NEDC cycle).

INFINITI EMERG-E is physical proof of Infiniti’s intention to produce a bold halo model befitting the brand’s promise of Inspired Performance, and also signals an array of exciting new technologies that the brand will adopt in its quest to build dramatic and sustainable high performance cars. INFINITI EMERG-E also provides a fresh expression of Infiniti’s design language applied to a high performance, mid-ship sports car for the first time.

INFINITI EMERG-E is also significant for being the first Infiniti that has been developed in Europe. More than that, its advanced technology deliberately draws on the knowledge of suppliers beyond Infiniti’s usual base in the quest to uncover the most innovative hardware and the deepest knowledge base.

Within its compact 175.7-inch length the two-seater INFINITI EMERG-E contains a pair of electric motors, a lithium-ion battery pack, four inverters, a three-cylinder range-extending internal combustion engine and a gasoline tank. All this is efficiently wrapped within highly aerodynamic, light bodywork characterized by a design fluency that could only come from Infiniti.

“It is elegant yet dynamic, and has graceful power,” said Senior Vice President and Chief Creative Officer Shiro Nakamura. “‘Mid-ship cars are usually less refined, but the body of INFINITI EMERG-E is like silk wrapping over the wheels.”