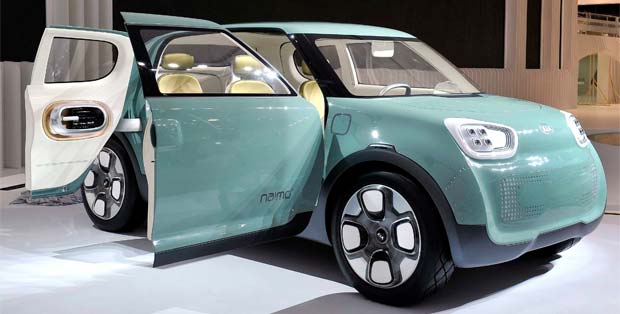 Kia has chosen the International Consumer Electronics Show in Las Vegas for its debut of the Ray EV production electric car and Naimo EV concept car for the first time in North America.

The UCD Concept, which can be seen as a fully working prototype on the Kia Naimo EV concept, represents the future of vehicle/occupant relationships. Featuring a “glass cockpit” style interface, UCD employs a digital “heads-up” display that replaces the traditional gauge cluster for information including speed, distance and battery life. The display also incorporates augmented reality features such as navigation directions or downloadable applications for parking to make driving an easier, more satisfying experience.

To improve screen visibility and accessibility, the UCD concept increases the touch-screen currently found on Kia’s UVO system from 4.3 inches to 12.3 inches with a resolution of 1280×480 for crystal clear images. This new, larger touch-screen also allows users to use multi-touch interactions such as “swipe” and “flick”.

The UCD concept also takes significant steps in safety, including the integration of the driver-status monitor and Color Night Vision (CNV). Utilizing an infra-red LED and camera to monitor the driver’s face, the system detects changes in eye movement and also recognizes whether the driver’s eyes are opened or closed, examining alertness and safeguarding against an accident caused by the driver falling asleep at the wheel. CNV – which builds off the previously developed black-and-white “Smart Night View” system that assists in identifying potential hazards during dusk or night time by combining two infra-red cameras, an infra-red lamp and a processor to offer a clearer picture of the road – has been enhanced for the UCD concept. Now using two infra-red lamps and a color infra-red camera, the integrated processor is able to distinguish pedestrians in the camera’s field of view, highlights them on the 12.3-inch touch-screen display and triggers a warning sound to alert the driver.[wzslider height=”400″ lightbox=”true”]Kia Naimo Electric Vehicle Concept
Taking its name from the Korean word “Ne-mo”, (pronounced “Neh-mo,” meaning “square shape”), the Naimo EV concept was conceived by Kia’s international design team in Seoul, and is characterized principally by its simple lines and solid, muscular stance.

The third electric vehicle design to be unveiled by Kia Motors Corporation in a year, the 153.5-inch long Naimo concept explores the possibility of introducing a zero-emissions, five-door, four-seater city car into future markets.

The uncomplicated overall design is accentuated by a number of striking key details, including the wraparound windscreen and asymmetric sunroof design, and front and rear dot-style LED headlamps and positioning lamps.

Innovative technology features can be found throughout, giving the car a premium feel and ensuring the car’s exterior remains uncluttered. Naimo has no traditional wiper blade on the windscreen – instead employing a high-intensity air jet at the base of the windscreen that performs an “air wiper” function. Conventional door mirrors have also been replaced with miniature cameras installed in the A-pillars.

Power comes from a PMSM (Permanent Magnet Synchronous Motor) electric motor with a maximum output of 107 horsepower and maximum 207 pound-feet of torque, enabling Naimo to reach a top speed of 93 mph. A twin-pack 27 kWh battery is located under the trunk floor and uses innovative LiPoly (Lithium Ion Polymer) technology that offers numerous advantages over other battery types. Equipped with this battery, Naimo provides a driving range of 124 miles on a single charge. To enhance range, Naimo is fitted with special low-drag 20-inch diameter alloy wheels.

Under the quick recharging cycle (50 kW) the Naimo’s battery can be recharged to 80 percent of its capacity within 25 minutes. Under the normal cycle (3.3 kW), 100 percent power is attained after five and a half hours.

Kia Ray Electric Car
Launched in December, the all-new Ray is the first EV in the world assembled on the same production lines as its regular combustion-engine sibling, and is built exclusively for the domestic Korean market.

Capable of a range up to 86 miles on a single charge, the Ray EV is powered by a 50kW electric motor and high-capacity 16.4 kWh lithium ion polymer battery pack engineered to be capable of a 10-year lifespan and packaged neatly under the rear seat and cabin floor, with the battery only needing six hours to be fully charged using a 220V outlet and just 25 minutes while in “fast charge” mode.

Though slightly heavier than the gasoline-powered Ray, the EV model’s 167 Nm of torque ensure ample power and responsive performance, with a top speed of up to 81 miles per hour. The automatic transmission offers drivers the choice of two modes – “E,” (eco), which optimizes the delivery of torque to achieve minimum battery consumption and maximum driving rage, or “B” (brake), which can be selected when driving downhill, on highways or on mountain roads to maximize braking power.

With the same striking exterior styling as its gasoline sibling, the Ray EV can be distinguished with four small enhancements. A flap in the front radiator grille covers an electricity inlet for a 220V power supply for the “slow charge” mode, while another inlet for the “fast charge” mode is fitted in the same location where the gas cap would be. Special decals can be found on each front door marking “Zero Emissions EV” while sleek 14-inch alloy wheels improve aerodynamic efficiency.

Inside, the Ray EV features a unique instrument cluster, displaying electric motor operation, battery status and distance to recharge. It also is equipped with the first-ever EV-specific navigation system that features a seven-inch screen and provides crucial information for EV drivers such as the nearest locations of slow/fast recharging stations. The display shows a circular-shaped area in which the vehicle can travel with its current level of battery power, so that drivers can see which destinations are reachable without a recharge.