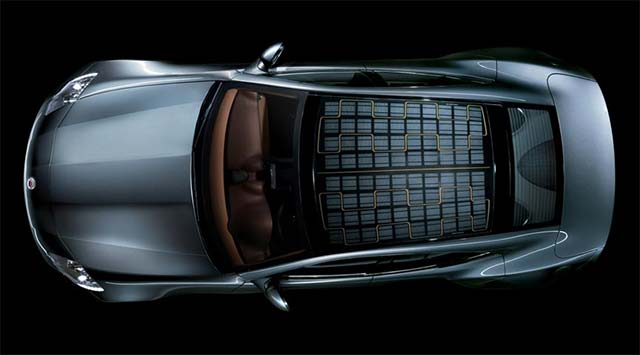 Consumers aren’t embracing electric cars and trucks, partly due to the dearth of charging stations required to keep them moving. Charging electric cars by solar cell would appear to be the answer. But most cells fail to meet the power requirements needed to directly charge lithium-ion batteries used in today’s all-electric and plug-in hybrid electric vehicles.

Researchers at Case Western Reserve University, however, have wired four perovskite solar cells in series to enhance the voltage and directly photo-charged lithium batteries with 7.8 percent efficiency–the most efficient reported to date, the researchers believe.

The research, published in the Aug. 27 issue of Nature Communications, holds promise for cleaner transportation, home power sources and more.

“We found the right match between the solar cell and battery,” said Liming Dai, the Kent Hale Smith Professor of macromolecular science and engineering and leader of the research. “Others have used polymer solar cells to charge lithium batteries, but not with this efficiency.”

In fact, the researchers say their overall photoelectric conversion and storage outperformed all other reported couplings of a photo-charging component with lithium-ion batteries, flow batteries or super-capacitors.

Perovskite solar cells have active materials with a crystalline structure identical to the mineral perovskite and are considered a promising new design for capturing solar energy. Compared to silicon-based cells, they convert a broader spectrum of sunlight into electricity.

In short order, they have matched the energy conversion of silicon cells, and researchers around the world are pursuing further advances.

Dai’s lab made multilayer solar cells, which increases their energy density, performance and stability. Testing showed that, as desired, the three layers convert into a single perovskite film.

By wiring four lab-sized cells, about 0.1 centimeter square each, in series, the researchers further increased the open circuit voltage. The solar-to-electric power conversion efficiency was 12.65 percent.

To charge button-sized lithium-ion batteries, they used a lithium-ion-phosphate cathode and a lithium-titanium-oxide anode. The photoelectric conversion and storage efficiency was 7.8 percent. Through 10 photo-charge/galvanostatic (steady current) discharge cycles lasting nearly 18 hours, the technology maintained almost identical discharge/charge curves over all cycles, showing high cycling stability and compatibility of the components.

The researchers are developing small-scale prototypes and working to further improve the perovskite cell’s stability and optimize the system.

This would seem to make the technology a perfect fit for cars with a more traditional look than the Immortus solar sports car, whose every available sky-facing surface is covered with solar photovoltaic paneling.