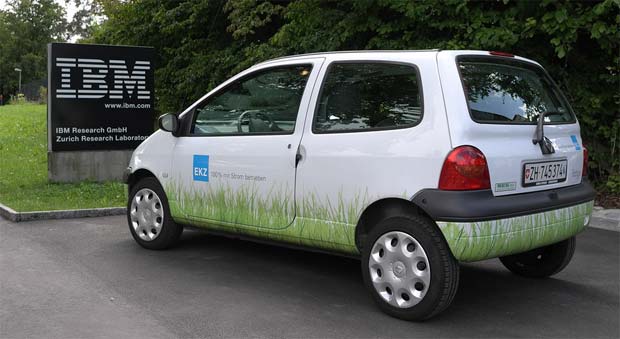 IBM and Swiss energy company EKZ say they are collaborating on a new pilot project that will allow consumers to charge electric cars and monitor energy costs using mobile devices.

Electric car owners in Zurich who want to charge up with green energy can have their battery communicate with a local utility’s solar panels and find out whether the panels are producing at that point in time.

This near-real-time information will also help utility providers better manage power-grid loads during peak charging times, according to the companies.

The pilot combines a Web-based app designed and developed by IBM scientists in Zurich and a data recording device created by the Zurich University of Applied Sciences (ZHAW).

The device, roughly the size of a phonebook was installed in several electric cars, including a Renault Twingo to collect information on the vehicle’s battery charge level, location and the power source. The device transmits the data via a cellular network to an IBM cloud based on IBM BladeCenters running DB2 and WebSphere. This monitoring capability not only benefits the user but also provides utility providers with further insight into energy generation and consumption.

The project has the potential to contribute to Switzerland’s energy policy goal of increasing the proportion of electricity produced from renewable energy by 5,400 gigawatt hours (GWh), or 10 percent of the country’s present-day electricity consumption, by 2030. According to the latest statistics available, approximately 55.6 percent of Switzerland’s overall electricity production comes from renewable sources, with hydropower by far the biggest contributor at more than 96 percent.

The IBM app runs on most smartphones, tablets and Web browsers, and provides an integration point between the vehicle, the utility provider and the driver. Using a simple four-button interface the app shows the vehicle’s battery level, range of travel distance, vehicle location, charge schedule and current energy costs in real time.

One-click charging
Whether at home, in the office or thousands of miles away, electric vehicle owners can quickly consult their mobile device to check whether their car’s battery level is sufficient for its next use. Another advantage of the app is that it can be programmed to start battery charging at a future point in time, for example when rates are lowest or when a trip is planned.

The IBM app also allows vehicle owners to delegate the responsibility of recharging the battery to the utility provider, which can schedule charges based on the availability of renewable resources, such as sun and wind, allowing the utility to improve load balancing and prevent outages. EKZ believes this will be a value added service that will gain more significance as electric vehicles become prevalent.

To analyze the programmed charging process of electric vehicles with renewable energy, the pilot project takes real-time production data from photovoltaic solar panels located at EKZ’s facility in Dietikon, which then gets transmitted to the cloud service. In this charge mode, the electric vehicle is charged when solar electricity is being produced. If less solar energy is being generated, the charging process can adapt automatically.

This project along with the recently announced EcoGrid EU project in Denmark demonstrates the progression towards a stable and robust power grid by addressing the entire end–to-end process, from power plant to plug. By integrating all sustainable technologies – from electric vehicles to solar systems and wind farms, the industry can reduce greenhouse emissions while ensuring reliable energy production.[wzslider height=”400″ lightbox=”true”]