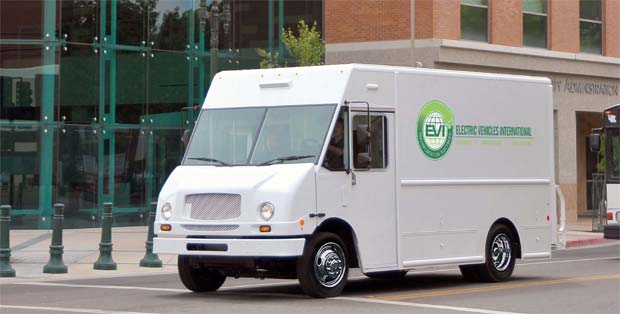 These electric vehicles will have a 90-mile range and displace an estimated 126,000 gallons of fuel a year that would have been burned running diesel Vehicles.

Electric Vehicles International called the purchase the largest deployment of zero-emission delivery vehicles in California and one of the largest single deployments of commercial all-electric vehicles in the world.

EVI and UPS have been working for over two years on this project, including a successful 90-day demonstration in the fall of 2010. Through that demonstration, UPS used data collected to analyze the vehicle return on investment. Early next year 100 electric delivery Vehicles will be placed in service to help clean California air in the South Coast Air Basin, San Joaquin Valley, and the Sacramento Valley.

UPS currently has 28 all-electric vehicles in its fleet operating in New York City and in Europe.

UPS operates one of the largest private fleets of alternative fuel vehicles in its industry with more than 2,200 in total. Since 2000, UPS’s “green fleet” has traveled more than 200 million miles. Besides all-electric technology, UPS has deployed Compressed Natural Gas, propane, Liquified Natural Gas and hybrid- electric vehicles in the United States, Canada, France, Germany, Brazil, Korea, the United Kingdom and Hong Kong. It also has tested hybrid hydraulic and hydrogen fuel cell vehicles.