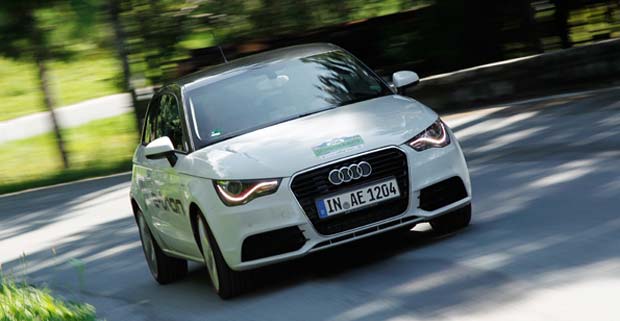 The 2011 victory of the A1 e-tron follows the R8 e-tron’s win last year. The second Audi in the rally, a Q5 HFC with a fuel cell finished in sixth place. A total of 32 electric vehicles were evaluated.

After three days, 307 kilometers and a total altitude difference of 11,541 meters, the A1 e-tron bearing the number 206 was named the winner of the second Silvretta Electric Car Rally Montafon. The event took place from July 7-9 as part of the 14th Silvretta Classic.

The name Silvretta refers to a group of mountains in the eastern Alps of Austria. The Audi A1 e-tron won against 31 competitors in a rally, that was held on highly taxing mountain roads with inclines up to 15 percent, presenting a special challenge to electric vehicles. The Audi Q5 HFC, which was also entered by Audi, achieved sixth place. This was the best final result of all cars with a fuel cell.

The A1 e-tron contains technology that Audi’s development engineers are using to study the mobility requirements for such a future-oriented concept. The technological basis includes an electric motor with a maximum output of 75 kW that is powered by a lithium-ion battery. The battery features a 12 kWh capacity and can be completely charged in 30 minutes (quick charge), or in less than three hours (standard charge). It offers a range of 50 kilometers. To prevent drivers from being stranded by an empty battery, the A1 e-tron also comes equipped with a combustion engine, which can charge the battery as needed. The one-disc rotary engine (254 cc) is located under the trunk floor; it provides 15 kW of output intended solely to charge the battery, rather than to directly power the wheels.

The A1 e-tron is designed with a local emission-free electric drive system, which is ideally suited for driving in a city.[wzslider height=”400″ lightbox=”true”]