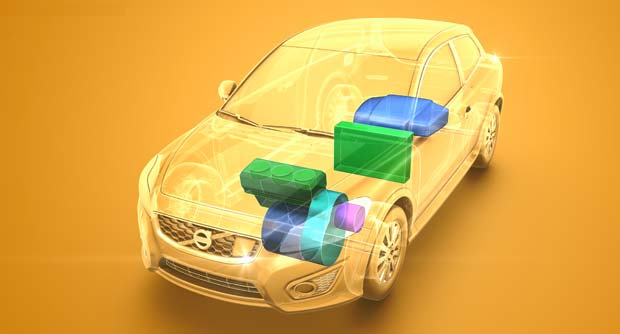 Volvo Car Corporation is taking the next step in the company’s electrification strategy by producing test cars with Range Extenders – electric cars that are fitted with a combustion engine to increase their effective range.

The projects, supported by the Swedish Energy Agency and the EU, encompass three potential technology combinations. Tests of the various concepts will get under way in the first quarter of 2012.

The company’s technological developments in this area currently encompass three different technology combinations, with three-cylinder petrol engines being installed to complement electric drive to the front wheels. All the variants feature brake energy regeneration. The engines can run on both petrol and ethanol (E85).

Two of the solutions are based on the Volvo C30 Electric and one is based on the Volvo V60 Plug-in Hybrid. In both cases, the standard battery pack has been somewhat reduced in size to make room for the combustion engine and its fuel tank.

Technical concept I: Volvo C30 with series-connected Range Extender
This is based on a C30 Electric with a three-cylinder combustion engine producing 60 horsepower (45 kW) installed under the rear load compartment floor. The car also has a 40 litre fuel tank.

The combustion engine is connected to a 40 kW generator. The power it generates is used primarily to drive the car’s 111 horsepower (82 kW) electric motor, but the driver can also choose to let the generator charge the battery, thus increasing the car’s operating range on electricity.

The Range Extender increases the electric car’s range by up to 1,000 km – on top of the 110 km range provided by the car’s battery pack.

Technical concept II: Volvo C30 with parallel-connected Range Extender
Here the car gets a more powerful three-cylinder combustion engine at the rear and a 40 litre fuel tank. The difference between this and the first solution is the parallel connection, whereby the turbocharged 190 horsepower engine primarily drives the rear wheels via a six-speed automatic transmission. This gives a better fuel efficiency rating when driving with the combustion engine cruising on the highway. Via a 40kW generator the battery can also be charged to give the car increased range on electricity alone.

The Range Extender increases the electric car’s range by more than 1,000 km – in addition to the range of up to 75 km provided by the car’s battery pack.

Technical concept III: Volvo V60 with parallel-connected Range Extender
This is a solution whereby the entire drive package is installed under the bonnet at the front. The 111 hp (80 kW) electric motor is supplemented with a three-cylinder petrol turbo engine producing 190 hp (140 kW), a two-stage automatic transmission and a 40 kW generator. Power from the combustion engine drives the front wheels via the gearbox and recharges the battery pack whenever needed.

Up to 50 km/h, the car is always powered solely by electricity. The combustion engine is activated at higher speeds. What is more, it charges the battery pack when its charge drops below a predetermined level.

The battery pack is located under the rear load floor and it gives the driver a range of 50 km on electricity alone. The car also has a 45 litre tank for petrol or E85.

With this technology, the Range Extender increases the car’s total range by more than 1,000 kilometres.