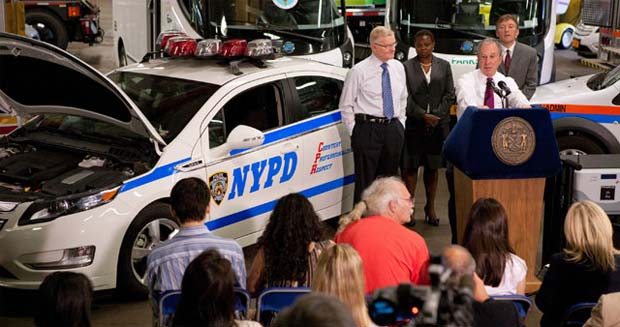 New York City mayor Michael Bloomberg announced on Tuesday that the city has added 70 new electric vehicles to the 360 already in the city’s fleet.

The city also launched an informational web site to educate New Yorkers about the benefits of electric vehicles.

The City’s electric vehicle program is made possible due to a partnership with the New York State Power Authority and funding from the U.S. Department of Transportation – each helped fund a portion of the cost differential between the purchase of an electric vehicle and gas-powered vehicle – and the U.S. Department of Energy, which provided a grant to the charger manufacturer Coulomb to provide the public charging stations installed throughout the city.

“This is the latest and largest-ever addition of electric vehicles to the City’s fleet, which is already the largest municipal clean-air vehicle fleet in the nation,” Bloomberg said in a statement. “We will continue to lead by example, but we also must provide New Yorkers with tools to make environmentally friendly choices in their own lives.”

The Chevrolet Volt is the first electric car being used by the NYPD. The NYPD already uses electric scooters and electric powered golf carts on boardwalks, in parks and some transit hubs.

The Administration is already working towards the use of electric vehicles in the City’s fleet of more than 13,000 yellow taxis. As part of its selection as the supplier of New York City’s Taxi of Tomorrow, Nissan is working with the City and taxi owners on a pilot program to study the use of zero-emission electric vehicles as taxis. Nissan will provide six 100 percent electric Nissan LEAFs to taxi owners for testing in 2012 as well as the charging stations to support their use. The City’s Taxi of Tomorrow – the Nissan NV200 – can be manufactured as an all electric taxi, if the pilot program proves successful.