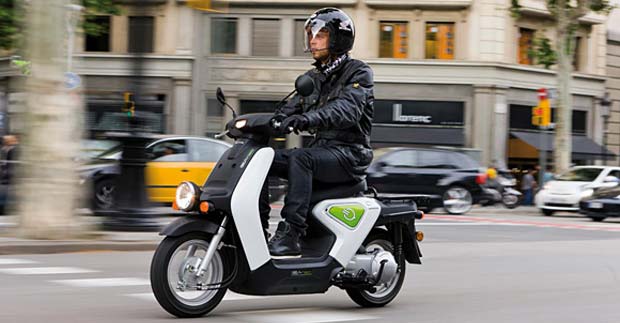 Honda announced a demonstration program of the EV-neo electric scooter in conjunction with Barcelona City Council beginning in July 2011.

Honda will provide Barcelona City Council with 18 EV-neos for the period of one year.

A wide range of incentives exist for EVs in Barcelona and with motorcycles accounting for 30% of all vehicles in the city, Barcelona was an ideal location for this Demonstration Program, Honda said Wednesday.

The electric scooter is powered by a 72V/12.6Ah lithium ion battery and can be loaded with up to 30 kg of cargo.

The EV-neo offers up to 34km of range (based on a riding test at a constant speed of 30 km/h on a level surface) from its Toshiba SCiB lithium-ion battery pack.

Honda claims it takes just 30 minutes for a full recharge with the quick charger, designed exclusively for the EV-neo and using a 200-volt power source. With a portable standard charger, stored under the seat, it takes 3.5 hours to fully charge from a 100V outlet.