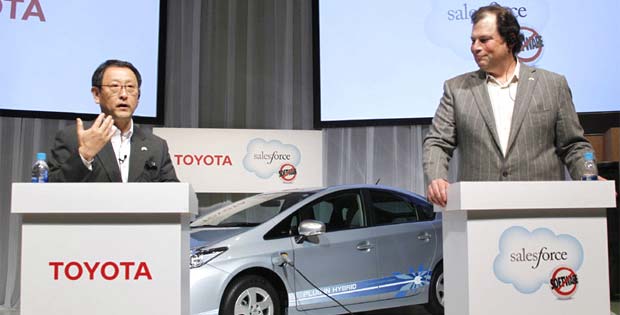 Toyota Motor Corp. and Salesforce.com Inc. will launch “Toyota Friend,”a private social network for Toyota owners who will own electric cars and plug-in hybrid vehicles being introduced by the Japanese carmaker next year.

Toyota Friend will provide a variety of product and service information as well as essential maintenance tips, creating a rich car ownership experience.

For example, if an electric car or plug-in hybrid vehicle is running low on battery power, Toyota Friend would notify the driver to re-charge in the form of a “tweet”-like alert. In addition, while Toyota Friend will be a private social network, customers can choose to extend their communication to family, friends, and others through public social networks such as Twitter and Facebook. The service will also be accessible through smart phones, tablet PCs, and other advanced mobile devices.

To date, TMC has developed its own telematics services to connect people, cars and their surroundings. Through Toyota Friend, TMC aims to offer its telematics services worldwide. Moving forward, TMC plans to advance toward the realization of future mobility by teaming up proactively with global IT companies.