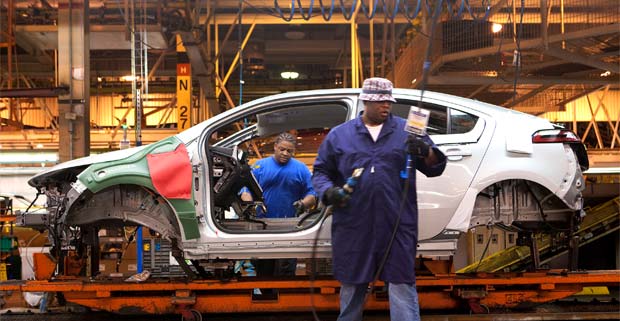 General Motors says it will reconfigure the Detroit-Hamtramck Assembly plant so it can significantly expand production of its Chevrolet Volt extended-range electric cars.

GM will shut down the plant for four weeks in June for planned upgrades to prepare for a significant increase in the rate of Volt production, along with assembly of the 2013 Chevrolet Malibu midsize sedan.

Already in tight supply, the number of Volts available for delivery to retail customers will be further restricted over the next three months before production resumes and the Chevrolet Volt and the Opel Ampera begin being exported to Europe and China.

The company says the upgraded plant will be able to meet global demand for the Volt and its European counterpart, the Opel Ampera.

GM said it would build 16,000 of the Chevrolet Volt and Opel Ampera units. That includes about 3,500 for overseas delivery and 2,500 to use as demos at dealerships. Next year, GM plans to build 60,000 Volts at its Detroit-Hamtramck plant, with 45,000 of those designated for sale in the U.S.

The 2011 Volt was launched in California, New York, Connecticut, Maryland, Michigan, New Jersey, New York, Texas, Virginia and Washington, D.C.  The Volt will be available nationwide and in Europe, China and Canada by the end of this year.