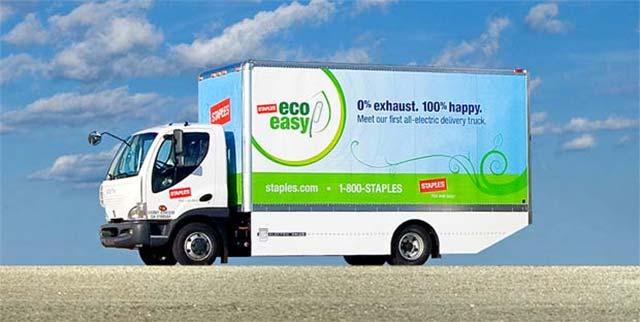 Staples’ new Smith electric trucks have zero emissions and offer fuel costs that are as much as 75 percent lower than diesel. The new addition to Staples’ delivery fleet will consist of 41 electric trucks with 30 operating in California, 10 in Ohio and one in Missouri.

The purchase follows last month’s announcement of Frito-Lay buying a total of 176 all-electric Smith trucks, which will start operating in 2011. Other Smith customers include Coca-Cola, Pacific Gas & Electric and AT&T.

Smith Electric produces the Newton electric truck. The truck delivers a top speed of 55 mph, offers end users battery ranges from 50 to 120 miles on a single charge and a payload of over 16,000 pounds.

It operates at peak effectiveness in urban applications that demand heavy stop and go driving. A single overnight charge provides more than enough range for most urban delivery routes.