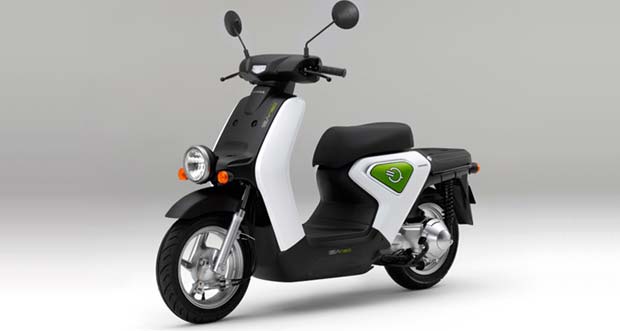 Honda has revealed the latest prototype of the EV-neo electric scooter and announced plans to begin lease sales in Japan in December 2010 to businesses and individual business owners who provide mainly delivery services.

Equipped with a lithium-ion battery and a brushless motor, EV-neo realizes excellent environmental performance with zero CO2 emissions in use.

The battery is rechargeable using a household power source with attention given to the range per charge.

Honda plans to start leasing the scooters — the equivalent of a 50cc gasoline-powered bike — in December and says its target market is companies that make deliveries, such as newspapers and pizza parlors. The EV-neo has a cruising range of 30 kilometers (19 miles) on one charge.

Under the key words of “quiet and clean” Honda held the world premier exhibition of the EV-neo concept model (under the name EVE-neo) at the 41st Tokyo Motor Show in 2009 as one of Honda’s new-generation personal mobility products which will contribute to the realization of a low-carbon society while transporting people and cargo. The mass-market model of EV-neo is currently under development.[wzslider height=”400″ lightbox=”true”]