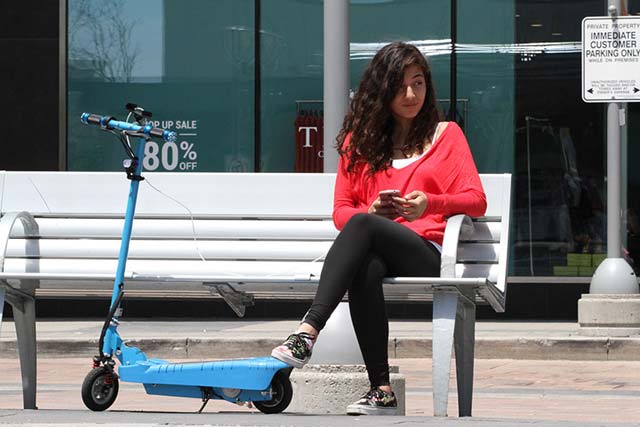 Daymak, a Toronto-based developer of personal light electric vehicles, announced the launch of the all-electric Photon scooter with a solar panel on top of the base, allowing you to charge it in natural sunlight when you are not using it.

Fully electric, the Photon re-charges under any daylight at approximately 0.3 km/hour using its 6W solar panel. It is constantly being charged when not in use, increasing the distance range.

The Daymak Photon can travel distances of up to 15 km (9.3 miles) using its 24V battery pack, which is available in lithium or lead acid batteries. The Photon can also be used as a battery source to charge any USB device including cell phones and tablets.

It also has integrated Bluetooth speakers and a USB charging port for your smartphone. The scooter has an alarm system that activates when your scooter is moved. It also has an expandable smartphone holder and a LED headlight.

The SRP for the scooter has been set to start from $299 USD/ $375 CAD. Daymak is launching the Photon on Kickstarter, where early buyers will be able to purchase first editions at discounted rates starting from $149 USD.[wzslider height=”400″ lightbox=”true”]