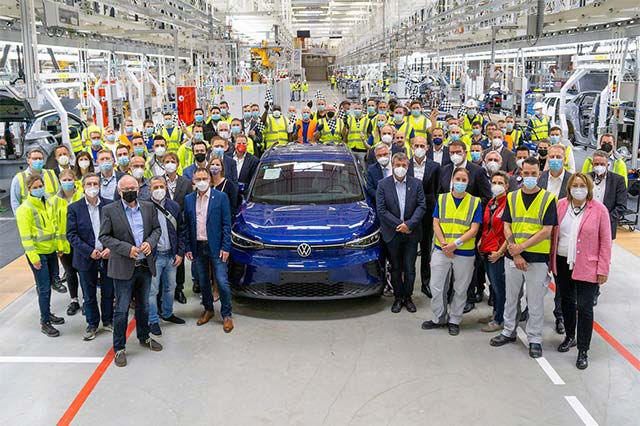 Volkswagen is pressing ahead with gearing its plants to electric mobility. Volkswagen is expanding its global production network for electric vehicles by starting to make the all-electric ID.4 in Emden.

Emden is now the second site for electric vehicles in Germany following Zwickau and also joins the Chinese plants in Anting and Foshan. Chattanooga (ID.4) and Hanover will also commence production this year.

As a result, Volkswagen is creating the conditions in 2022 for building 1.2 million all-electric vehicles a year based on the MEB in the future at its sites in Europe, the U.S. and China. Volkswagen has invested around one million euros in converting the Emden plant with its 8,000 employees. Emden is thus the first high-tech site for electric mobility in Lower Saxony.

The Volkswagen Group will invest a total of 21 billion euros in Lower Saxony up to 2026 and make the federal state Germany’s center for electric mobility.

“Rapid expansion of production capacities for our successful ID.4 model is a key component of our ACCELERATE strategy. It helps us accelerate the transformation to zero-carbon mobility and create further capacities to meet the high demand for electric vehicles,” said Volkswagen CEO Ralf Brandstätter. “With our clear commitment to the site, we aim to show that cost-effectiveness and competitiveness are not only possible in the region, but that we can even enhance them lastingly.”

Apart from the ID.4, Emden will make another model – the AERO B – next year. In addition, production of the iconic ID. Buzz will commence this year at Volkswagen Commercial Vehicles in Hanover. It will be joined from 2023 on by the ID.3 made in Wolfsburg, while a further electric vehicle – the Trinity – will then roll off the assembly line at the location starting in 2026. The Group is also investing in Braunschweig, Salzgitter and Kassel, among other things in further expansion of the existing MEB production of battery systems, rotors/stators and electric motors.

The Salzgitter location is being expanded further into a European battery hub. Investments in Lower Saxony will add up to 21 billion euros overall by 2026 – an unprecedented level, also by international standards.

The ID.4’s start-up is on schedule, despite the global challenges during the two-year conversion phase. Emden’s maximum production capacity at the end of 2022 will be 800 units per working day, depending on the supply situation.

Six new production halls and five new conveyor bridges and logistics buildings over a total area of some 125,000 square meters have been created as part of the plant’s conversion. A foundation for successful transformation is the qualification concept at Emden, which comprises training near to the production line and virtual training, as well as sharing of knowledge and experience with Volkswagen’s Zwickau site. More than 400 employees from Emden have been assigned to Zwickau since early 2020 in order to prepare for producing electric vehicles.

The ID.4 is now produced at the Emden and Zwickau sites and at the Anting and Foshan plants in China. And expansion continues: Production for the U.S. market will start in Chattanooga in the fall. The global production network will then grow to five locations. Following its market launch in early 2021, the ID.4 has quickly become a success: In the first quarter of 2022 alone, Volkswagen delivered more than 30,000 units – meaning every one-in-two all-electric vehicles from Volkswagen is an ID.4. 163,000 units have been delivered since its launch, making the ID.4 the Volkswagen brand’s and the Group’s best-selling e-vehicle. In many markets, the electric SUV jumped to the top of the sales charts in its very first year and was the best-selling all-electric vehicle in countries such as Denmark, Finland, Ireland or Sweden. There are currently around 73,000 orders on hand worldwide for the successful model.