Tesla Model 3 was best-selling BEV in Western Europe in 2021. Twice as many Model 3 units delivered as the next best model – Renault Zoe. 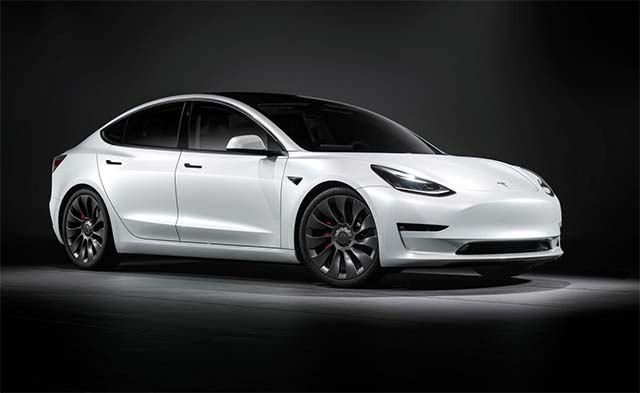 Tesla’s Model 3 accounted for every ninth new BEV passenger car registered across Western Europe in 2021 according to the data published by Schmidt Automotive Research.

Thanks to this achievement, it also claimed the number one BEV model accolade across the region last year.

According to the data, 139,600 Model 3s were registered across the 18 market region which includes the original EU member states prior to the 2004 enlargement plus Norway, Switzerland, Iceland as well as the UK.

The Model 3 which saw a change in the production base for the European destined models switch from the US to its Chinese facility in the second half of the year accounted for narrowly twice as many vehicles as the next best BEV model, the Renault Zoe (70,300) across the region. 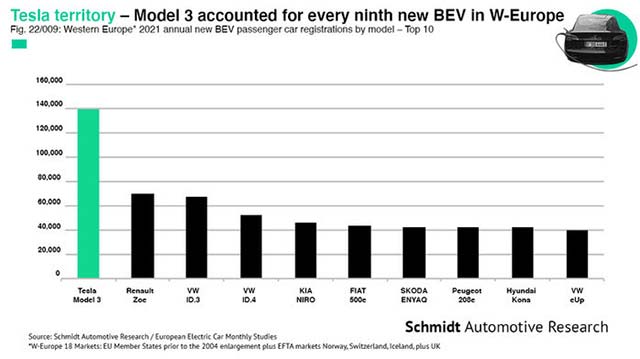 Germany soaked up the most Model 3s accounting for 1-in-4 – helped by the strong government funding which also helped offer attractive leasing deals requiring no deposits, with rates starting at €299 per month. It was closely followed by the UK.

Volkswagen Group’s combined MEB-based models achieved fewer than 200,000 models across Western Europe during the same period with just 189,000 models from the Škoda Enyaq, VW ID.3 and ID.4 as well as the Audi Q4 and Cupra Born arriving on roads stretching from Dublin to Dresden and or Oslo to Olbia.

Those models manufactured at the newly converted BEV-only Zwickau site (not including the Škoda) managed fewer than 150,000 region-wide deliveries last year according to the study.

The US destined ID.4 is also currently being exported from Zwickau for now. Just 16,700 ID.4s entered US roads last year, according to VW data.