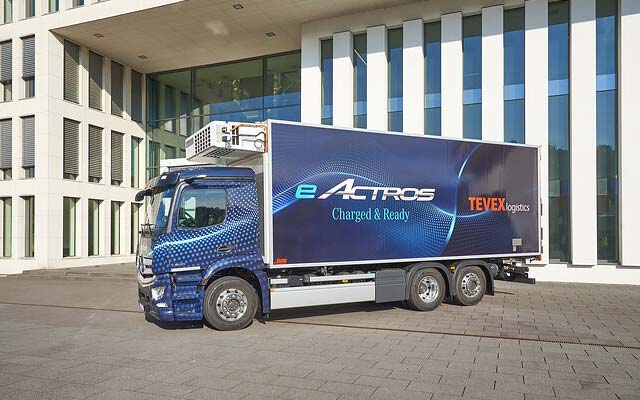 Three trucks recently commenced operations in a shuttle transport at Logistik Schmitt, which is based in the northern Black Forest, for the food logistics service provider Simon Loos in the Netherlands and at Tevex Logistics in North Rhine-Westphalia.

Another eActros is being configured as a refuse collection vehicle for Remondis, a leading company for recycling, water management, and municipal and industrial services. These electric trucks were built as part of the trial runs in the production facility.

eActros at Logistik Schmitt: flexible and mobile in continuous operation

Rainer Schmitt, Managing Partner of Logistik Schmitt: “An early prototype of the battery-powered eActros has been undergoing intensive practical testing at our company since July 2019 and clearly proved its worth. This vehicle has reliably travelled around 70,000 kilometres to date in all types of weather, carrying a total of more than 137,000 load units on just under 7,000 trips. In doing so, it has transported more than 40,000 tonnes of freight. We are very delighted that the prototype is now being replaced by a near-series eActros.”

The new vehicle is also operating between Rastatt and Gaggenau in three-shift operation. The eActros transports gear housings on its trips to Rastatt, while it carries axle components to Gaggenau. The kilometres actually covered amount to a total of up to 300 per day. A subsequent concept comparison with the eWayBW catenary project will also form part of the multi-year test of the heavy-duty electric truck in the Murgtal region near Rastatt and Gaggenau. Daimler Truck itself does not plan to introduce any catenary vehicles.

Locally CO2-neutral transport with Simon Loos in the Netherlands

Simon Loos, a leading company for logistics services based in the Netherlands will use an eActros equipped with a refrigerated box for the Albert Heijn supermarket chain. The daily tour of the eActros starts at Albert Heijn’s regional distribution centre in Delfgauw in the province of South Holland. From there, the e-truck supplies supermarket stores in various cities in the region, including Rotterdam, The Hague and Delft, with dry goods and fresh, temperature-controlled food. The eActros will run seven days a week, covering up to 300 kilometres every day in a locally CO2-neutral operation. The batteries will be charged overnight at the distribution centre in Delfgauw, where Albert Heijn have finished their state-of-the-art fast charging station.

Wim Roks, Fleet Manager, Simon Loos: “As the leading logistics service provider in the Netherlands, we naturally place great emphasis on sustainability in our strategy. We have been gaining experience with alternative drive systems in our fleet since 2014. Last year we started a very successful practical test of the first eActros in the dynamic 24/7 supermarket distribution at Albert Heijn. We are proud to also bring the new near-series eActros into action. Our daily operation will greatly benefit in terms of flexibility as the driving range has now increased significantly compared to the eActros prototype. We are happy to learn if charging in between trips will even be necessary, although fast charging capacity is available at the depot. Together with Albert Heijn and Mercedes-Benz Trucks we are looking forward to the new experiences we can gain with the truck over the coming months and make us ready for entering the Zero Emission zones which will be implemented from 2025.”

Tevex Logistics in Rheda-Wiedenbrück plans to use the new eActros in multi-shift operation. The logistics subsidiary of the Tönnies Group will transport its own high-quality food products to various customers in the greater local area each day. The company expects the truck to travel up to 600 kilometres per day. The electric truck will be recharged at a charging station on the company’s own grounds in eastern Westphalia.

“The model project involving the eActros from Mercedes-Benz is the next step in the t30 sustainability strategy of Tevex Logistics, the logistics subsidiary of the Tönnies Group. We want to become the most sustainable food product company on the market,” says the managing director of Tevex, Dirk Mutlak. “Logistics plays a key role in the reduction of our products’ carbon footprint.”

eActros as a refuse collection vehicle at Remondis

Another eActros is already being configured and will be used by Remondis as a refuse collection vehicle. The waste disposal company plans to use the eActros in the inner city area of Cologne for the waste disposal for commercial customers. In addition, a test run in the municipal house-to-house collection is planned. Peter Lindlar, Managing Director of REMONDIS Wertstoff-Recycling GmbH & Co. KG: “We are looking forward to an electric future and a reduction in CO2 in the inner city area.”

Innovative refrigeration machine from FRIGOBLOCK for the eActros

The two eActros at Simon Loos and Tevex Logistics are equipped with refrigeration machines from FRIGOBLOCK for temperature-controlled transport.

“With the pace of change and innovation in refrigerated transport accelerating, Thermo King’s and FRIGOBLOCK’s expertise in electrification has positioned us as a trusted partner to respected industry leaders such as Mercedes-Benz Trucks,” said Francesco Incalza, president of Thermo King in Europe, Middle East and Africa. “It is core to our strategy to continuously look for new ways to innovate the cold chain and drive electrification in the transport industry. The smart, innovative design of the FK25i FRIGOBLOCK unit delivers measurable benefits to our customers and helps further the advancements in refrigerated, electric-driven truck technologies to minimise the environmental impact of transport operations.”