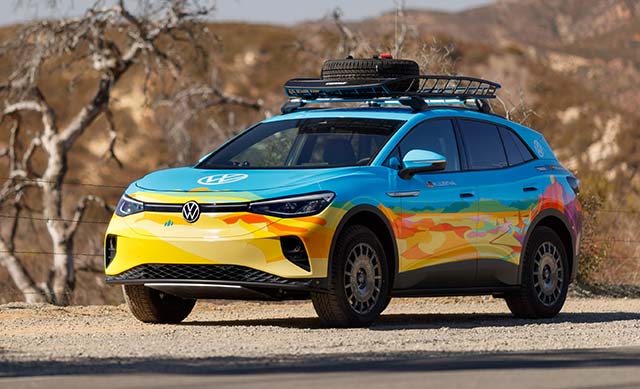 Volkswagen of America will make its inaugural entry in the Rebelle Rally, a woman-driven and navigated off-road competition in the deserts of Nevada and California.

“The Rebelle Rally is blazing a new trail in motorsports, and presents tremendous opportunity for us to introduce our ID.4 and electric vehicles to an even greater audience,” said Kimberley Gardiner, senior vice president, marketing, Volkswagen of America. “Volkswagen helped make off-road competitions popular in the ‘60s, and we’ve only just begun to explore the potential of electrification in off-roading motorsports. We’re really excited to have Mercedes and Emily leading the charge on this experience of a lifetime.”

The Rebelle Rally, now in its sixth year, is the first all-women rally raid event of its kind in the United States, challenging teams and vehicles across 1,400 miles through the deserts of Nevada and California. Pairs of drivers and navigators use their skills, navigation tools and limited supplies to overcome challenges along the course from Las Vegas to Glamis, Calif., along trails that respect the desert environment.

Lilienthal and Winslow will compete in the ID.4 AWD Pro in the crossover category. Tanner Foust Racing and Rhys Millen Racing are modifying the vehicle with new suspension components, tubular control arms, fabricated skid plates, battery protection and other items to fully equip the vehicle for the driving expedition. The vehicle will also be outfitted with Thule rack accessories and Yokohama Geolandar A/T tires.

The vehicle wrap was created by Salt Lake City-based artist Liz Kuz, who drew inspiration from the anticipated rally terrain throughout the Nevada and California deserts.

In its brief existence, the ID.4 already has a history of off-road racing after competing in the NORRA Mexican 1000 earlier this year. A production ID.4 1st Edition RWD vehicle was modified by Rhys Millen Racing and managed by Tanner Foust Racing, with Foust at the wheel, giving the duo great insight into getting the team and vehicle ready for the Rebelle Rally.

Oct 5, 2021Blagojce Krivevski
Mercedes-Benz eActros is starting practical operation with first customers in Germany and the NetherlandsGM to Invest in Next-Generation Battery Facility That Will Lower EV Costs