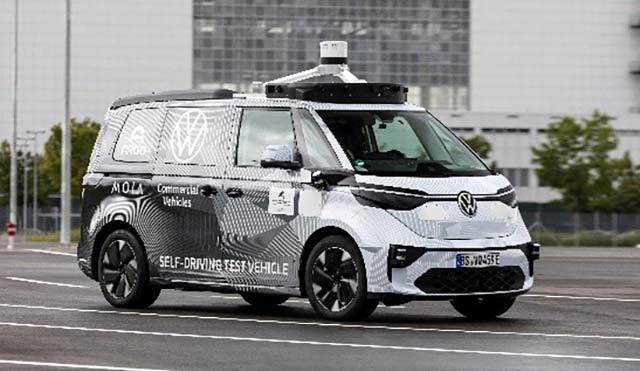 In black and white camouflage and with high roof structures, it rolls quietly on his big wheels into the hall where the Volkswagen Group’s New Auto Night takes place on the eve of the IAA Mobility 2021:

One of the first five self-driving test vehicles of the fully electric ID. BUZZ AD (Autonomous Driving) from Volkswagen Commercial Vehicles (VWCV), the series versions of which will be deployed in commercial mobility services such as MOIA beginning in 2025. Munich is also the European headquarters of partner Argo AI, the global autonomous driving technology company developing the self-driving system (SDS), including maps, hardware, software, and cloud-support infrastructure that powers the ID. BUZZ AD.

Starting in 2025 in Hamburg, the self-driving ID.BUZZ AD will bring its passengers to their destination in a ridepooling service operated by MOIA. The media guests who use the MOIA transport service – with drivers – for “New Auto Night” get a taste of this.

Argo is actively testing in many urban areas, also in Munich with the ID. BUZZ AD prototypes. The Argo self-driving system comprises a suite of sensors, software, and the computer platforms to provide a 360-degree awareness of the vehicle’s environment, predict the actions of pedestrians, bicyclists, and vehicles, and direct the engine, braking, and steering systems so that the vehicle moves safely and naturally, like an experienced driver.

Argo AI uses cameras, radar, and lidar to achieve safe self-driving.. The company’s proprietary sensor Argo Lidar sits high on the roof of the ID. BUZZ prototypes, and can detect objects from a distance of more than400 meters (1300 ft.). Its patented Geiger-mode technology has the ability to detect even the smallest particles of light (a single photon), so that even objects with low reflectivity, like black-painted vehicles, can be detected and thus very precise representations of the environment are possible.

Testing of the ID. BUZZ AD occurs in collaboration with Volkswagen Commercial Vehicles at the Argo AI development centre in Neufahrn, near Munich. Argo also has a nine hectare closed-course near the Munich airport to test a variety of traffic situations unique to European driving conditions, in addition to their test track in the United States. “The ID. BUZZ AD test fleet represents a milestone in our partnership with Volkswagen Commercial Vehicles,” said Bryan Salesky, founder and CEO of Argo AI. “Building on our five years of development and learnings from our operations in large, complex U.S. cities, we are excited to soon begin testing on the streets of Munich in preparation for the launch of the self-driving commercial ridepooling service with MOIA.”

With its plans for the development of autonomous driving services, Volkswagen Commercial Vehicles shows in the IAA environment how inner-city traffic can be relieved by ridepooling and, at the same time, it’s safer thanks to the self-driving system: “An environment recognition system from six lidar, eleven radar and fourteen cameras, distributed over the entire vehicle, can capture much more than any human driver can from his seat,” explains Christian Senger, Head of Autonomous Driving at Volkswagen Commercial Vehicles. The brand has set up its own business unit for the development of autonomous driving and has acquired a stake in Argo AI.

While VWN and Argo AI are developing the autonomous vehicle and the self-driving system, MOIA is the third component for an autonomous mobility service. The Volkswagen subsidiary has extensive experience in the field of mobility services and fleet management. Within a very short time, MOIA has set up Europe’s largest, all-electric ride pooling service with drivers. It has transported millions of passengers. As of 2025 MOIA will be the first user of the ID.BUZZ AD. “We bring our expertise to the cooperation with Argo AI and VWCV and will develop an autonomous mobility service in addition to our regular service. Cities all over the world want to make their traffic more efficient and more climate-friendly. Autonomous ride pooling improves urban mobility, increases road safety and make cities more attractive. Hamburg will be the first city to offer autonomous ride pooling.

Sep 7, 2021Blagojce Krivevski
Polestar to expand presence to 30 global markets by end of 2022 as rapid growth continuesUK: demand for electrified vehicles surges with PHEVs rising most, up 72.1%