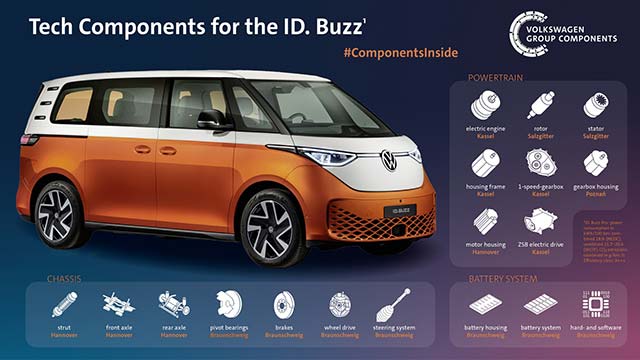 Following the production start of the ID. Buzz, German component locations have begun to produce key technology components for the new e-model. Plants in Braunschweig, Kassel, Salzgitter and Hannover are now supplying the battery system, the electric drive and the chassis.

It’s the next step in a transformation process initiated in 2015 that is converting the company into an e-mobility system supplier. Volkswagen Group Components will invest €2.3 billion in the electrification of its German locations through 2026 – well more than half of overall investments.

Thomas Schmall, the Member of the Board of Management of Volkswagen AG with responsibility for Technology and the CEO of Volkswagen Group Components, said: “As one of the pioneers, we have been a part of the transformation to e-mobility since 2015. Today, Volkswagen Group Components is developing and producing key components for virtually all e-models made by the Group – from the CUPRA Born to the ID. Buzz. The German locations are pacesetters of the global roll-out at our locations in Europe, China and the United States. Our goal is to become a globally leading system provider for e-mobility.”

Hannover location to join the production network of MEB battery systems
Volkswagen Group Components is responsible for the entire assembly of the front and rear axles of the ID. Buzz and ID. Buzz Cargo. In preparation for this change, a new axle assembly line was set up in Barsinghausen: About 200 employees from the nearby component plant in Hannover will fit the axles for the ID. Buzz there in the future. In the process, Hannover is now beginning to manufacture MEB components. In 2024, the assembly of the MEB battery system for the ID. Buzz will follow. This system is currently being supplied by the component plant in Braunschweig. Hannover is also manufacturing flexible fast-charging stations, the hardware needed to create a mobile charging infrastructure for e-vehicles.

Component locations are evolving into e-mobility system suppliers
The component plant in Kassel has already been converted into a centre of expertise for electric drives. The electric drives for the MEB are produced there. Furthermore, it will also develop and manufacture the pulse inverter for the Group’s future modular electric drive matrix. In doing so, it will assume responsibility for the “brain” of the electric drive train. The development and manufacture of battery systems are performed by the Braunschweig location. The Salzgitter plant will produce the elementary components rotor and stator for the electric drive of the MEB. The location will also be converted into the European battery hub of the Volkswagen Group. In 2025, the Group’s first gigafactory will begin to produce battery cells there.