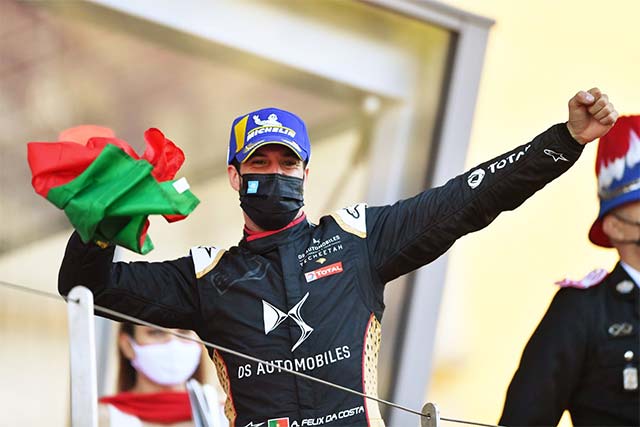 DS TECHEETAH continues to reign in the Principality of Monaco. After winning its first Monaco E-Prix together as a team in 2019 with Jean-Eric Vergne, Reigning champion, António Félix Da Costa, took his first win of the season, his sixth in Formula E, and gave the new DS E-TENSE FE21 its second success after a spectacular race, closely fought until the last corner.

At the start of the race, Da Costa kept the advantage but the battle at the top was intense throughout the race. Portuguese driver and Robin Frijns (Envision Virgin Racing) exchanged the lead four times and in the closing laps. In the final lap, Da Costa made “one of the riskiest moves of his Formula E career” half way around the final tour of the race, taking home victory around the Principality.

Frijn’s second place takes him to the top of the Drivers’ standings ahead of previous points leader Nyck de Vries (Mercedes-EQ Formula E Team), with five points separating the pair going into the mid-season break.

Mitch Evans (Jaguar Racing) came home in third, although he was leading the race until the very last moment. As he sought to conserve usable energy with Da Costa on his tail, the Kiwi fell off the pace but managed to secure the final podium position.