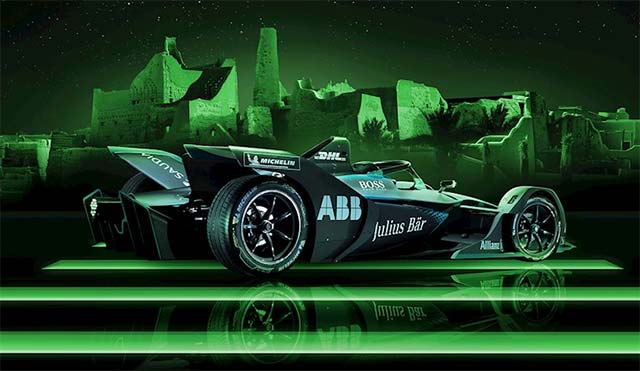 Formula E is set to return this Friday on February 26 in Diriyah, with the opening two rounds of Season 7 marking a special milestone – its first event as an FIA World Championship.

Season 7 will see the most competitive line-up in motor racing fight it out for the ABB FIA Formula E World Championship, with 12 teams, including 10 manufacturer outfits, and 24 of the best drivers from around the globe heading to the season-opening rounds in Diriyah, Saudi Arabia this week, 26 & 27 February.

At pre-season testing in Valencia, competition was fierce – even by Formula E’s standards. Maximilian Guenther (BMW i Andretti Motorsport) set the early 2020/21 pace, topping the timesheets for a second season in succession – with the whole field separated by little over 0.750 seconds.

The top ten runners from that first session in Spain drive for eight different teams, and on top of that, each of the five sessions in Valencia saw a different driver from a different squad, representing a different manufacturer at the top of the timesheets.

With the battle for top spot closer than ever this season, then, will DS TECHEETAH be able to seal a record hat-trick of Teams’ and Drivers’ titles? Antonio Felix da Costa strode away in unprecedented circumstances in Berlin to win the Season 6 title by the biggest margin in Formula E history – some 71 points – but the Portuguese is unlikely to have it all his own way in 2020/21.

Da Costa first needs to fend off teammate and two-time title-winner Jean-Eric Vergne. JEV has the same tools at his disposal and will be eager to bite back.

Nissan e.dams will challenge with an unchanged line-up of 2015/16 champion Sebastien Buemi and teammate Oliver Rowland – the Japanese manufacturer having ended Season 6 on song as runners-up in the Teams’ table.

Status quo, too, at the team Nissan edged into third spot – Mercedes-EQ – as Stoffel Vandoorne and Nyck de Vries return for a second consecutive campaign. The Silver Arrows will look to build on a promising debut season in which their Belgian ace wound up second only to Da Costa in the Drivers’ standings.

Sam Bird and Mitch Evans team up at Jaguar Racing with the former moving on from Envision Virgin Racing – the squad he’d been with since the very first Formula E race, sealing nine wins along the way. Meanwhile, young German Pascal Wehrlein rejoins the championship with TAG Heuer Porsche, alongside countryman Andre Lotterer.

Sergio Sette Camara is back at DRAGON / PENSKE AUTOSPORT full-time as teammate to Nico Mueller, and 2016/17 champion Lucas di Grassi will once again welcome reigning DTM title-winner Rene Rast (Audi Sport ABT Schaeffler) to the fold for the German’s first full season with Audi having competed, like Sette Camara, in the Berlin finale.

Mahindra Racing has an all-British line-up for 2020/21, with Alexander Sims partnering Alex Lynn. So does NIO 333 in Tom Blomqvist and Oliver Turvey – that makes for a record seven compatriots on the grid, all battling for British bragging rights.

Diriyah’s double-header in the dark

The Riyadh Street Circuit will not only once again provide the spectacular backdrop to the first event of the season, but it will also break new ground as host to Formula E’s inaugural night races.

The fast and flowing 2.49km clockwise track flanks the stunning At-Turaif UNESCO World Heritage Site and remains largely unchanged; though track surface work has led to the reprofiling of Turns 9, 12/13, 14 and 18, which will inevitably throw up a curveball.

Last season, Sam Bird battled up the order from fifth on the grid for Envision Virgin Racing to seal victory in the curtain raiser. The following day, Alexander Sims (BMW i Andretti Motorsport) led lights-to-flag to secure his maiden win in Formula E.

Antonio Felix da Costa holds the fastest race lap around the circuit, with a 1:12.481s set in Round 2 last season. From Season 7, Formula E Founding Partner TAG Heuer will put its name to that accolade, which awards the driver who sets it in each round an extra championship point – providing they finish inside the top 10.

Hosting Formula E’s first ever night races has been the culmination of many months of planning, working with the Kingdom’s Ministry of Sport (MOS) to turn the dream of a sustainable night race into a reality.

A team has been on-site since December installing some 600 LED floodlights to light the circuit, each using 1.5kW of energy – half the power used by traditional metal halide units. The LED lighting can also be switched on and off instantly, meaning they can do more than just light the track, adding to the spectacle.

To support teams during the global health crisis, Formula E and the FIA decided to extend the homologation period, giving manufacturers a couple of options when it came to their powertrains for the next two seasons.

They could choose to continue with their 2019/20 powertrain – the components that convert the energy from the batteries into motion – bring in an all-new setup that has to last for the coming two seasons or delay the introduction of their new parts until later this season, carrying over their current package until then.

DS TECHEETAH, Nissan e.dams and DRAGON / PENSKE AUTOSPORT have decided to start the season with their current equipment and play their hand later this season.