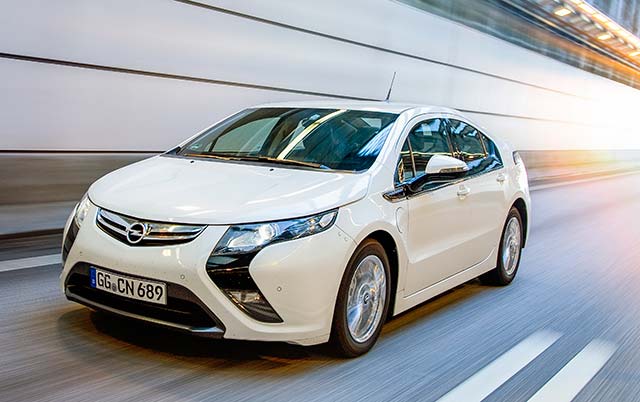 Opel/Vauxhall is celebrating the 10th birthday of its first electric car with a range extender, the Ampera, which made its world premiere at the 2011 Geneva Motor Show, and jump started carmaker’s commitment to electric vehicles.

Based on a Chevrolet Volt, the Ampera was the first electric car with an extended range from a European manufacturer. The Ampera has since been followed by a fleet of award-winning electric vehicles including the all-new Corsa-e, Mokka-e, Vivaro-e and Combo-e. Opel/Vauxhall committed to offering an electrified variant across its entire model line-up by 2024 and introducing eight electrified models by the end of 2021.

The revolutionary, sleek and practical Ampera was Europe’s first electric vehicle to enable “go anywhere at any time” mobility. When it went on sale at the end of 2011, the Ampera founded a completely new vehicle segment in the European automobile market.

The Opel Ampera received enthusiastic receptions across the board. More than 5,000 “e-pioneers” declared themselves as potential customers even before the car went on sale.

The media were equally impressed, the jury of leading international journalists electing the Opel Ampera and its Chevrolet Volt sister model as winners of the “2012 European Car of The Year” award. In a long term test started that same year by the ADAC German automobile club, the Ampera demonstrated its durability by covering more than 200,000 km in eight years.

Not content with popularity and awards alone, the Ampera proved its mettle in competition too. In 2012, Opel’s extended-range electric vehicle (EREV) won the 13th International Monte Carlo Rally for electric cars and alternative propulsion systems. The winning Ampera was driven by French rally legend, Bernard Darniche and Joseph Lambert, three more finished among the top ten.

The Ampera confirmed Opel as an innovation-leader and immediately became Europe’s best selling electric car in 2012, with 6,631 units and circa 21.0 per cent share of the European electric passenger car segment. The leading market for the EREV was the Netherlands, followed by Germany and the United Kingdom. Following the end of production in 2015, registrations of the Ampera totalled more than 10,000 units.

The front wheels of the Ampera are electrically driven at all times. A 16 kWh lithium-ion battery pack feeds an advanced, 111 kW/150 hp electric drive unit to deliver between 40 and 80  km of pure electric operation with zero emissions – depending on terrain, driving technique and temperature – when fully charged. According to the regulations for measuring fuel consumption and CO2 emissions at the time, the Ampera consumed 1.2 l/100 km and emitted 27 g/km CO2 combined in the NEDC cycle.

On the road, the Ampera’s Voltec electric propulsion system ensures lively performance. Instant torque of 370 Nm enables zero to 100 km/h acceleration in around nine seconds and a top speed of 161 km/h. The Ampera delivers nearly silent electric drive under battery power and a refined performance even in extend-range drive mode.

Thanks to the Ampera’s intelligent and practical extended-range capability, drivers enjoy peace of mind because they will never be left stranded with a depleted battery.

In addition to a pure battery, zero-emissions driving range sufficient to meet the daily needs of most European drivers, the Ampera also provided a total driving range of more than 500 kilometres thanks to its range-extending petrol engine. This is seamlessly engaged to generate electricity when the battery has reached its minimum state of charge.

The electric drive unit, located under the hood alongside the gasoline engine, consists of an electric traction motor, an electric generator/motor, and a planetary gear set that improves overall efficiency by reducing the combined rotational speed of the electric motors. Unlike a conventional powertrain, there are no step gears.

In extended-range mode, which activates whenever the battery has reached its minimum state of charge, motive power from a generator is seamlessly delivered to the electric drive unit. The generator is driven by a highly efficient 1.4-liter, 63 kW/86 hp gasoline engine.

Most of the time, drivers selected one of the two main driving modes: Normal and Sport. ‘Sport’ mode increases the sensitivity of the accelerator pedal. There are two additional modes for special driving situations: ‘Mountain’ mode ensures sufficient battery energy is available for sustained driving on alpine roads. ‘Hold-charge’ mode preserves the remaining energy capacity of the battery pack by activating the gasoline engine.

The T-shaped, 198 kg, 16 kWh (installed capacity) battery pack is positioned in the centre tunnel of the vehicle. It comprises 288 lithium-ion battery cells, configured for optimum performance and durability. It uses a liquid thermal management system and at the time was the only mass-produced battery pack that could be warmed or cooled – an industry first.

The Ampera was delivered with a six-meter long charging cable conveniently stowed in the trunk. Using a 230V/6 or 10A power outlet, owners could fully recharge the battery in around nine or five hours respectively and programme the charging time.

The cabin offers all the space, comfort, and convenience features you would expect from a modern compact car: five-door flexibility, comfortable accommodation for four adults, and a seat up/seat down load carrying capacity of 310/1,005 litres.

Opel also worked hard to ensure the new Ampera was fun to drive.

The advanced friction brake blending system maximizes the energy generated during braking. It allows for maximum regenerative braking through the electric motor, recharges the battery when braking, and seamlessly engages the friction brakes when the pedal is stepped on harder for a fast stop.