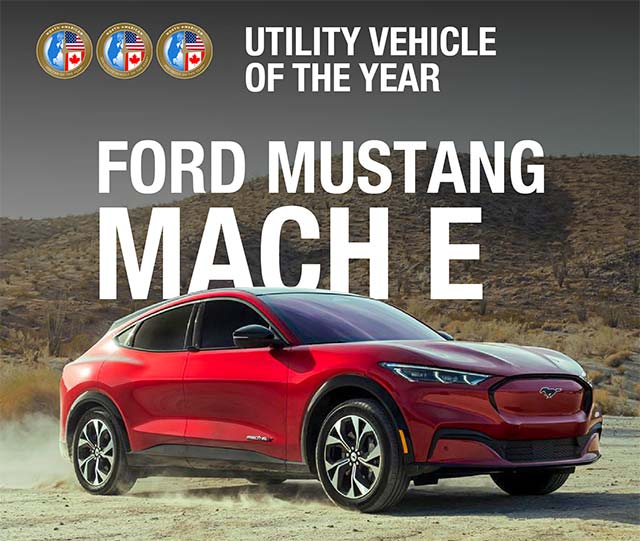 All-new, all-electric Mustang Mach-E was named 2021 North American Utility of the Year by a 50-member independent jury of print and broadcast journalists from the U.S. and Canada.

The North American Car, Utility and Truck of the Year awards are intended to recognize the most outstanding new vehicles of the year. These vehicles are benchmarks in their segments based on factors including innovation, design, safety, handling, driver satisfaction and value for the dollar.

The organization gives out three awards: “North American Car of the Year,” “North American Utility Vehicle of the Year ,” and “North American Truck of the Year.” The awards are given by an independent jury of automotive journalists from the United States and Canada instead of by a single publication, website, radio or television station.

Until now, it would have been unheard of to put an iconic Mustang badge on a utility vehicle, but NACTOY jurors say Ford’s decision to take that risk paid off with the Mustang Mach E.

“The Mustang Mach-E leapfrogs European EVs as the Tesla Model Y’s most formidable challenger yet. Like Tesla, Mach-E understands that the premium EV market is as much about interior tech as it is about torque,” said Detroit News Auto Critic and NACTOY juror Henry Payne.

Ford brought the all-new, all-electric Mustang Mach-E to life through a development process concentrated entirely on customer needs and desires, resulting in a sleek, beautiful SUV that delivers spirited ride and handling – with state-of-the-art connected vehicle technology that makes it even better over time.

All-electric Mustang Mach-E achieved numerous successes in expert rankings. In December it was named as Edmunds Top Rated Luxury EV on top of recognition as the Green Car Journal 2021 Green Car of the Year. Mustang Mach-E also was named Best Car to Buy 2021 by The Car Connection and Green Car Reports earlier this month.