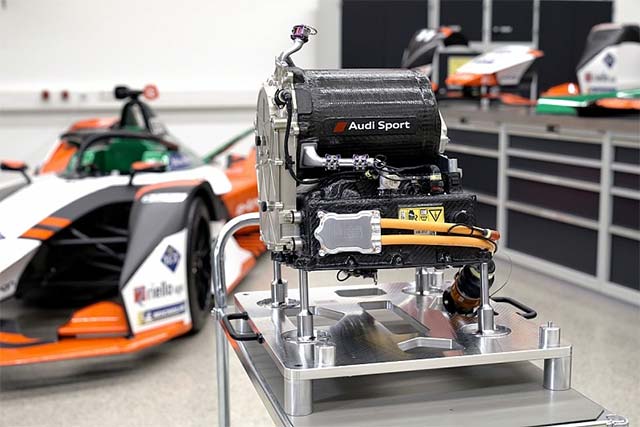 We’re a month out from the start of what’s shaping up to be the most competitive season in ABB FIA Formula E World Championship history, with 12 teams, 10 manufacturers and a grid full of world-class drivers all looking to get off to a flyer under the lights in Saudi Arabia.

With the field so finely poised, and less than a second separating all 24 drivers on the evidence of the Valencia test back in November, teams have been paining over whether to stick or twist with the tools they’ve got at their disposal in a bid to get ahead.

With the onset of the global health crisis, Formula E and the FIA introduced cost-saving regulations that were voted in to give teams three options when it came to their powertrain for the season ahead.

They could choose to continue with their 2019/20 powertrain – the components that convert the energy from the batteries into motion – bring in an all-new setup that has to last for the coming two seasons or delay the introduction of their new parts until later this season, carrying over their current package until then.

So, who’s sticking and who’s twisting? Let’s start with the teams that opted for new parts under the skin of their 2020/21 challengers.

Audi Sport ABT Schaeffler has gone all-out with its completely in-house designed-and-built effort, unveiled just prior to the Valencia test when it took the covers off the e-tron FE07.

The result is the Audi MGU05 – a one-speed electric drivetrain with an internal rotor, external magnets, a highly-efficient cooling system and six electrical phases. Head of e-Drive development at Audi Sport, Stefan Aicher, worked with his team to “push to the limits”, managing to save weight by using lightweight materials whilst rethinking its packaging and integration within the FE07’s chassis.

The undertaking has been described as one of Audi Sport’s “most challenging and intensive projects ever” by Formula E project leader Tristan Summerscale, with the team pulling out all the stops to add to its title tally following Lucas di Grassi’s 2016/17 triumph, and its own as a fully-fledged manufacturer outfit via the Teams’ Championship in 2017/18 at the first time of asking.

As a customer squad, Envision Virgin Racing will reap the benefits with the new unit set for its car too – to Robin Frijns and new-boy Nick Cassidy’s benefit. “It’s a step in the right direction on weight and efficiency,” said Managing Director Sylvain Filippi.

Nissan e.dams, DRAGON / PENSKE AUTOSPORT and DS TECHEETAH have opted to delay their homologation and go with their Season 6 package for the season-opening rounds, giving them more time to perfect the developments they’ve got in store whilst running tried-and-tested parts. For DS TECHEETAH, the form team with consecutive Drivers’ and Teams’ titles, this makes plenty of sense. They’ll initially run an updated E-TENSE FE20.

“Software is a big part of Formula E and that doesn’t stop,” said Team Principal Mark Preston. “We’ve continued pushing the software side and it’s still a race car at the end of the day, so there are many elements other than the powertrain. For us, it’s the right choice to bring in the new package later in the season.

“We wanted to make sure we’ve got the best package possible not only in performance but also reliability for the next two seasons to come,” added reigning champion Antonio Felix da Costa.

Nissan e.dams left Berlin looking like they’d perhaps got the best of the Tempelhof Airport Circuit and their current equipment. Oliver Rowland tallied a maiden victory, with the Japanese outfit making up for lost time following the outlawing of its dual-motor setup that was set to take on the 2019/20 campaign.

The software and data race

Customers are able to take advantage of brand new powertrains from the likes of Mercedes and Audi in Formula E, which begs the question: what do they get out of it?

In Formula E, the rules and regulations mean that manufacturers have to provide their customers with the very latest version of their powertrain.

With the championship as much of a data and software race as it is an on-track battle, although not explicitly confirmed, having two teams running the same powertrain in different scenarios can only help. That’s double the data in the manufacturers’ race to improve their race cars, and take those learnings from Formula E to the road and their consumer car line-up.

After six full seasons of racing, Formula E’s teams and manufacturers are extracting ever more from their powertrain technology and software. The efficiency being achieved is mind-blowing as Gen2 reaches maturity. This year’s equipment has up to 97 per cent efficiency, which means all but three per cent of the energy from the battery is converted into kinetic energy, making the car move.

In any scenario those numbers are impressive but in comparison with other leading motorsport series like Formula 1, the figures are even more incredible. Mercedes’ championship-winning 2020 car achieves around 50 per cent efficiency, with hybrid technology and a combustion engine-based power unit. The rest of the energy extracted from that car’s gasoline fuel is lost as heat, sound and friction.

In a world of diminishing returns and as we accelerate away from fossil fuel power, efficiency is everything and Formula E’s teams and manufacturers are continuing to push the envelope and revolutionise the cars we drive on the road.

Jan 25, 2021Blagojce Krivevski
Siemens Sicharge D is one of the most efficient DC fast chargers on the marketVermont Had the Highest Number of Public Electric Vehicle Chargers per Capita in 2020