5 things to watch in the Paris ePrix 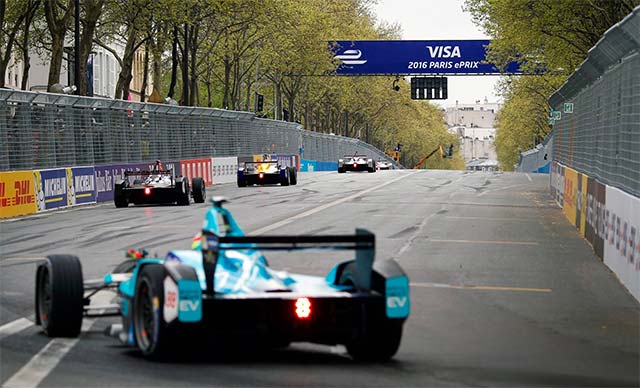 Formula E takes a step into the unknown this weekend as it stages its first ever back-to-back races with the Qatar Airways Paris ePrix rolling around just a week after the Monaco event.

What impact this lightning turnaround will have on the teams is just one of the key themes underscoring this weekend’s race:

Will a lack of prep tell?
Back-to-back races are in stark contrast to the usual rhythm of the Formula E calendar, where the gaps between races tend to be three weeks of more. The rapid turnaround will mean that the teams aren’t able to run through their pre-race preparations – simulation work, strategy modelling etc – as they normally would.

With track time at a premium in Formula E, there’s very little room for too much in the way of experimentation, so will this have an impact on the competitive order?

Will this be the first wet race?
It’s a remarkable that over the 26 Formula E races staged to far, there has yet to be a wet one. However, there are grey skies over Les Invalides today. A torrential storm hit yesterday and another is expected this afternoon.

The forecast is better for Saturday, but there remains the chance that this could be the race where the wet weather ability of the drivers, cars and the Michelin all-weather tyres is really put to the test.

Will Conway get Paris pay back?
It was a real Sliding Doors moment… Mike Conway had looked in fine form in Free Practice 2, setting the pace for Venturi and looking like a genuine contender. Then he went out for qualifying, his splits were looking good right up until the point Nick Heidfeld crashed in front of him and rejoined right in his path.

With nowhere to go contact was inevitable. And rather than being in Super Pole instead he was in 17th. With overtaking exceptionally tough, from the back row of the grid progress was difficult and he came home 14th. Had he have started in the top five, who knows what might have happened?

Now he’s been given a chance to get some closure in the form of a one-off drive for Faraday Future Dragon Racing. The team has had a tough time of late, but this could be just the fillip it needs.

How will Dillmann fare on his debut?
Joining a championship mid-season is a tricky prospect, but no more so than in Formula E, where the demands on the driver are unique.

For Tom Dillmann, who is standing in for Maro Engel this weekend, the learning curve will be ever so slightly less steep as he has at least sampled the car thanks to his shakedown outing in Mexico.

But this is a long way from understanding how to drive one of the all-electric racers in race conditions, managing energy and dealing with braking performance that varies as the regen power fades as the battery energy decreases. Venturi had its best race of the season last time out in Monaco, so a top 10 finish may not be beyond his reach.

Keep calm the pits
The pitlane for the Les Invalides track is tight even by Formula E standards. Getting the timing right for the car swap will be crucial and any unsafe releases could be extremely costly.

Last year there was an exceptionally close call between Sam Bird and Sebastien Buemi – there was no penalty give, but it was right on the edge. A second would have made all the difference and could have a profound impact on the result.