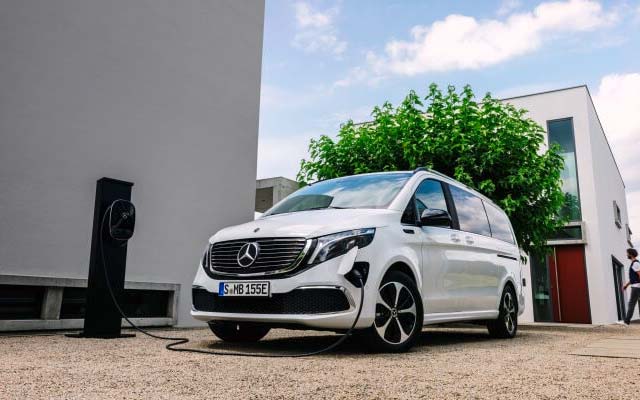 The Mercedes-Benz EQ family is being extended: from November the EQV, the first fully electric MPV from Mercedes-Benz, is available at dealerships and contractual partners.

In order to bridge the gap until the vehicles were actually available at dealerships, the EQV program for potential customers has drawn a great deal of attention. Simple online registration activated access to exclusive content, news, events and special offer packages.

The main campaign for the vehicle is now starting in line with its delivery to the retail market. With seating for up to eight persons and a range of 418 kilometres for daily routes and longer trips as well as numerous charging options, the locally emission free EQV is both environmentally and family friendly. In short: it’s the car for the next generation.

Which is exactly what the campaign claim “Make your move. For the next generation.” communicates. “Anyone who drives the locally emission free EQV is taking the right step towards the future. And is setting an example for following generations,” says Anja Gutmann, Head of Marketing Communication Mercedes-Benz Vans.

Following the idea of “green as a statement”, the subject of sustainability also plays an important role visually and subtly constitutes the leitmotif of the campaign across all channels with the use of green nature.

At the heart of the communication are two emotional spots that tell the story of three protagonists and their everyday life with the new EQV. Other animated formats and extensive cross-media measures are tailored to the respective target groups, addressing their own topic areas on their channels.

The campaign also includes nine printed motifs and numerous special formats. There are also a teaser spot which focuses on the family as a target group, four protagonist films, a product film and eight feature spots as well as stories, cinemagraphs, posts, ads and GIFs tailored specifically to social media.

PREUSS AND PREUSS, the lead agency for Mercedes-Benz Vans worldwide has implemented the EQV campaign. The films were produced by Iconoclast, while the photos for the campaign are from BAM Photographers. The concept for the EQV’s online presence was developed and realised by DGM Kommunikation.

The EQV combines the space and versatility of the V-Class with the advantages of a locally emission free drive system. In order that drivers reach their destination without the fear of insufficient range, the EQV is incorporated in an electric mobility eco-system. This is provided for by the innovative MBUX infotainment system and the Mercedes me App. All of the EQ-specific displays and settings can be operated using the MBUX touchscreen. For example, it is possible to activate the pre-entry climate control, adjust the charging settings and operate the navigation system with Electric Intelligence as well as the Mercedes me Charge functions.

The interior of the EQV offers the same versatility and functionality as the V-Class: seating for up to eight people in numerous configurations and a luggage compartment that is both flexible and large boasting a volume of up to 1410 litres. The EQV is not just a family and recreational vehicle; it is equally suited to operation as a representative company car or as a VIP and hotel shuttle vehicle.

Customers who buy the EQV profit not only from current financial incentives for electric vehicles but also from the service offers included in the purchase: a maintenance package valid for four years covers the costs for maintenance work in accordance with the service booklet and manufacturer’s specifications during this period and the Mercedes-Benz battery certificate covers the battery for up to 160,000 kilometres or eight years. The purchase price, starting at €69,588.40 (incl. 16 % VAT) also includes the Mercedes me Remote & Navigation Services with a contractual term of 36 months as well as the Mercedes me Charge function and Ionity membership – both for twelve months.

Mercedes-Benz Vans is also offering the EQV to all prospective buyers as part of a subscription model. This provides customers who want to use the vehicle flexibly for a certain period without wanting to make a long-term commitment, with another attractive option in addition to financing, leasing or renting a vehicle.