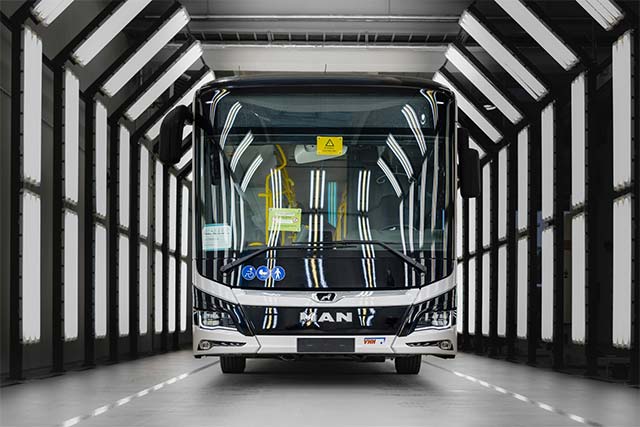 MAN Truck & Bus has started series production of battery-powered city buses at its Polish plant in Starachowice. The Lion’s City E will initially be produced in the 12-meter solo version.

The first customer vehicles will be heading off to the Hamburg-Holstein public transportation company (VHH).  The articulated Lion’s City E will follow about six months later and is scheduled to go into series production in the first half of 2021.

MAN unveiled the series production version of the Lion’s City E at Busworld in Brussels in October 2019. Sinse than, the MAN electric bus demo fleet has been cruising around the streets of Europe – negotiating extensive field trials in scheduled service operation and spending time with numerous customers in countries such as Germany, Spain, Belgium, the Netherlands and France.

The all-electric MAN Lion’s City E will be built in a flexible manner in the same production sequence as the other models in the new city bus generation, on a single production line and without any bridging facilities. A great deal of thought went into finding ways to fully integrate the production sequence into the existing setup. After all, on the electric bus, around 30 to 40% of the body shell alone is different to that of its conventional counterpart.

The 12-metre bus has 35 seats and can carry up to 88 passengers. The drive train delivers 160 kW to a maximum of 270 kW. MAN estimates the range at 200 to 270 kilometres from the modular batteries with 480 kWh installed capacity.

The all-electric MAN Lion’s City E can be charged via CCS2 combo plugs at the depot.