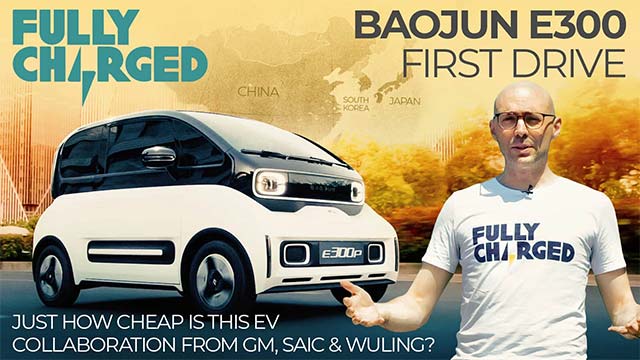 In this episode, Fully Charged’s East Asian correspondent, Elliot Richards, took the opportunity to take Baojun’s bizarre-looking E300 out on the roads around Shanghai.

Beyond its initial appearance the driving experience and the technology is more feature-rich than we might have expected for a car that costs as little as $9,700. The E300 does have its shortcomings of course and the braking in particular came in for sharp criticism.

When it comes to core statistics the Baojun E300 Plus has a 31.9kWh battery, an NEDC range of 190 miles – not unrealistic when city-only driving – and can be fully charged from empty in one hour.

The E300 family has a synchronous fixed ratio gearbox and rear-engine layout, generating 40 kW of maximum power and 150 Nm of maximum torque. It has a top speed of 62 mph and supports DC fast charging, which enables it to be fully charged in one hour.