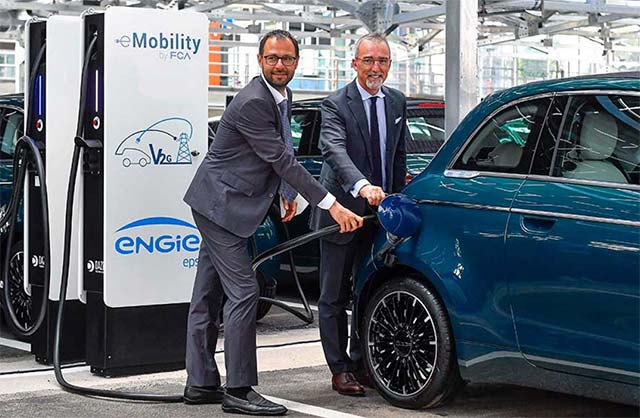 Fiat Chrysler Automobiles (FCA) has inaugurated a new vehicle-to-grid (V2G) charging project at its Mirafiori complex in Turin. Once fully completed, it will become the largest of its kind of the world.

In the presence of Minister of Economic Development Stefano Patuanelli, the highest officials from the Piedmont Region and the City of Turin – as well as many more guests from national and international institutions and publications – FCA, ENGIE Eps and Terna presented the V2G project, describing its features and how it works.

The V2G plant at Mirafiori is a project “100% made in Italy”. On the one hand, it is a significant opportunity for the Italian industrial system to take a leading role in the development of the future of sustainable mobility. On the other, it is the result of the joint effort of three companies that lead their sectors. In their use of such an innovative technology, their experiments are now beginning on a bidirectional charging solution that benefits from physical aggregation in a single point of interconnection with the power grid, capable of interacting with the other energy resources on site.

V2G technology enables vehicles to exchange energy with the power grid, making them a valuable resource for the national power grid operated by Terna, to contribute to the establishment of a more sustainable electrical system and to represent an opportunity to optimize the operating costs of the cars for the benefit of motorists, as well as a concrete possibility of contributing to a more sustainable electricity system.

Bidirectional technology – which both charges the car and returns power to the grid – can only work efficiently when the car and the charging infrastructure speak a common language. This is the focus of the trial launched with the inauguration of the plant.

V2G thus represents a major opportunity, which is why FCA – together with its partners ENGIE Eps, the technicians who built the plant, and Terna, the operator of the high- and ultra-high-voltage national power grid – has committed to a cutting-edge project, an example of genuine innovation.

The construction of the plant in just four months, despite the lockdown due to the COVID-19 outbreak, has enabled the transformation of what is typically only a cost (the storage of vehicles waiting to be delivered to the sales network) into a benefit that could be exploited by vehicle fleet managers in the not-too-distant future. Indeed, a (potentially high) number of vehicles parked for long periods in one place represents an opportunity to provide services to the network in an ‘aggregated’ manner.

Phase 1 of the plant’s construction has consisted of the installation of 32 V2G columns capable of connecting 64 vehicles, aimed at piloting the technology and managing the logistics of the storage area. By the end of 2021, the Drosso V2G project will be extended to interconnect up to 700 electric vehicles, making it the largest facility of its kind ever built in the world. The management of phase 2 will be mainly dictated by cost-effectiveness: the objectives will be to provide services to Terna power grid and to ensure a positive economic result for FCA and ENGIE Eps.

To cover the parking spaces for the cars connected to the V2G, ENGIE Italia is a partner in the construction of an enormous roof consisting of around 12,000 solar panels, which will supply the production and logistics facilities with ‘green’ energy. The plant will be able to produce over 6,500 MWh of energy every year, resulting in the offsetting of more than 2,100 tons of CO2 emissions per year, a boon for the environment. The project therefore represents a significant contribution to decarbonization in the industrial sector.