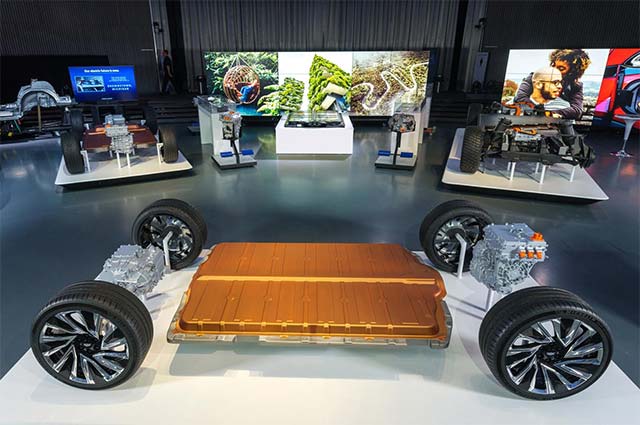 Throughout the COVID-19 pandemic, GM has remained committed to its vision of a world with zero crashes, zero emissions and zero congestion. In March, GM debuted its new Ultium battery technology, which will enable GM to offer an EV for everyone. And while the pandemic caused GM to temporarily suspend operations in the United States, the company continued to make progress on its electric vehicle development, and all Ultium platform EVs remain on schedule.

An Expanding EV Portfolio
In recent years, GM’s electric future has been best seen in the Chevrolet Bolt EV, which in model year 2020 is capable of driving an EPA-estimated 259 miles — a 21-mile increase from the previous model — on a single charge and is sold at an affordable price.

Beginning in 2020, GM’s EV portfolio will begin to expand with launches by Chevrolet, GMC and Buick. The next Chevrolet EV will be a new version of the Bolt EV, launching in 2021 as a 2022 model, followed by the 2022 Bolt EUV, launching Summer 2021.

The Bolt EUV will be the first vehicle outside of the Cadillac brand to feature Super Cruise, the industry’s first true hands-free driver assistance technology for the highway. The Cruise Origin, a self-driving, electric shared vehicle, shown to the public in January 2020 in San Francisco, was the first product revealed using GM’s third-generation EV platform and Ultium batteries. Later in 2020, GM plans to reveal the Cadillac Lyriq luxury SUV.

Production of the Ultium-powered GMC Hummer EV is expected to begin in Fall 2021 at the Detroit-Hamtramck assembly plant. Beyond North America, GM also plans an acceleration of electrification technology in China, the world’s largest EV market. GM is applying a diverse range of new energy solutions for China’s global and local brands, and the SAIC-GM joint venture will invest $4.3 billion to introduce at least nine hybrid or electric models over the next five years.

GM is well on its way to an all-electric future, with a commitment to 20 new electric vehicles by 2023 and plans for additional models taking us beyond that. GM’s all-new modular platform removes significant physical constraints associated with conventional vehicles — no need to build around gas tanks, engines, radiator or exhaust pipes, for example. In the past, EV design placed great importance on differentiating the EV visually from its ICE counterparts. No more. The flexibility of this new platform frees designers to proportion vehicles to meet unique brand personas and to design around vehicle and customer segment needs.

Here are the EVs that each GM brand anticipates introducing.

CADILLAC
GM’s luxury brand, plans to introduce four electric SUVs and one statement vehicle including:
• Cadillac Lyriq SUV, which is designed to hit the heart of the crossover market and meet the needs of customers around the world.
• A globally sized luxury three-row SUV that emphasizes interior space and cargo capability for the modern family.
• An SUV EV with attainable luxury— similar to today’s Cadillac XT4 — and aimed at this key global growth segment.
• A full-size, three-row luxury SUV that builds on the DNA of the brand’s highly successful Escalade.
• The Cadillac Celestiq Statement Vehicle that is an ultra-lux EV with bespoke, hand-assembled craftmanship and project build rate of only 1.2 vehicles per day.

CHEVROLET
Building on the success of the 2020 Chevrolet Bolt EV, which offers new front-end design and other exterior updates, the brand intends to launch:
• A mid-sized SUV targeted to U.S. customers who are looking for an electric option in this segment.
• Chevrolet BET Truck, which will be the brand’s first electric full-size pickup, offering 400+ miles of range on a single charge.
• Chevrolet Bolt EUV that features a distinctive SUV design inspired by the Chevy Blazer and offers Super Cruise driver assistance — the first vehicle outside of Cadillac to do so.

GMC
Teased during the 2020 Super Bowl telecast, GMC is bringing back the iconic Hummer brand through two models:
• GMC Hummer EV truck that boasts performance of 1,000 horsepower, 11,500 lb-ft of torque and 0 to 60 mph acceleration in three seconds.
• GMC Hummer EV SUV builds off the GMC Hummer EV truck but will be configured as an off-road-capable SUV.

BUICK
Two new all-electric entries for the Buick portfolio will carry the new face of the brand:
• A Buick SUV will offer more conventional crossover proportion that maximizes interior space and cargo.
• A Buick CUV will feature more expressive proportion with a greater emphasis on form and athletic fashion.

In addition, the Cruise Origin autonomous vehicle will be the first production vehicle from GM’s partnership with Honda.

GM is also on track to:

GM also recognizes the need for companies to leverage resources and leadership to drive positive change for the common good. During the pandemic, GM partnered with Ventec Life Systems to build 30,000 ventilators at GM’s Kokomo, Indiana facility. In addition to building ventilators, GM employees are producing face masks at facilities in Brazil, China, Mexico, Canada and the United States. All production is on track, with each site producing millions of face masks each month to help the communities where GM employees live and work.

This is the first sustainability report to be released since GM made a commitment to become the most inclusive company in the world. To achieve this goal, GM commissioned an Inclusion Advisory Board. Chaired by GM Chairman and CEO Mary Barra, the board consists of internal and external advisors dedicated to guiding GM’s commitment to building a culture that is safe and equitable.

“The past several months have been difficult and our world has changed. As we move through the world in a new way, GM is as determined as ever to create solutions that lead to a better future for all,” said Barra. “GM remains focused on delivering on our vision of a world with zero crashes, zero emissions and zero congestion, while becoming the most inclusive company in the world.”

Highlights from the 2019 Sustainability Report include: