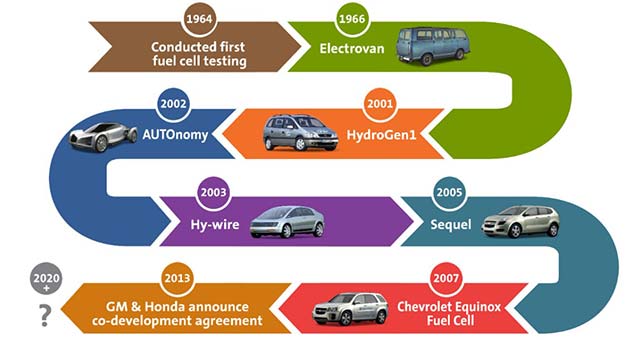 The collaboration expects to succeed by sharing expertise, economies of scale and common sourcing strategies.

GM and Honda plan to work together with stakeholders to further advance refueling infrastructure, which is critical for the long-term viability and consumer acceptance of fuel cell vehicles.

GM and Honda are acknowledged leaders in fuel cell technology. According to the Clean Energy Patent Growth Index, GM and Honda rank No. 1 and No. 2, respectively, in total fuel cell patents filed between 2002 and 2012, with more than 1,200 between them.

GM’s Project Driveway program, launched in 2007, has accumulated nearly 3 million miles of real-world driving in a fleet of 119 hydrogen-powered vehicles, more than any other automaker.

Honda began leasing of the Honda FCX in 2002 and has deployed 85 units in the U.S. and Japan, including its successor, the FCX Clarity, which was named the 2009 World Green Car. Honda has delivered these vehicles to the hands of customers in the U.S. and collected valuable data concerning real-world use of fuel cell electric vehicles.

As already announced, Honda plans to launch the successor of FCX Clarity in Japan and the United States in 2015, and then in Europe. GM will announce its fuel cell production plans at a later date.

Fuel cell technology addresses many of the major challenges facing automobiles today – petroleum dependency, emissions, efficiency, range and refueling times. Fuel cell vehicles can operate on renewable hydrogen made from sources like wind and biomass. The only emission from fuel cell vehicles is water vapor. Additionally, fuel cell vehicles can have up to 400 miles driving range, can be refueled in as little as three minutes, and the propulsion technology can be used on small, medium, and large vehicles.

“This collaboration builds upon Honda and GM’s strengths as leaders in hydrogen fuel cell technology,” said Dan Akerson, GM chairman and CEO. “We are convinced this is the best way to develop this important technology, which has the potential to help reduce the dependence on petroleum and establish sustainable mobility.”

Takanobu Ito, president & CEO of Honda Motor Co. Ltd. said: “Among all zero CO2 emission technologies, fuel cell electric vehicles have a definitive advantage with range and refueling time that is as good as conventional gasoline cars. Honda and GM are eager to accelerate the market penetration of this ultimate clean mobility technology, and I am excited to form this collaboration to fuse our leading fuel cell technologies and create an advanced system that will be both more capable and more affordable.”

In January, Ford, Nissan and Daimler AG announced an agreement to develop a common automobile fuel cell system, with the goal of producing the first mass-market fuel-cell vehicles as early as 2017. The automakers said they will collaborate on a global program across three continents in an effort to signal to suppliers, policymakers and the industry the seriousness of developing an emission-free technology.

Also in January, Toyota and BMW Group agreed to develop components for fuel-cell vehicles. GM and Toyota in 1999 had an information sharing partnership on fuel cells, but not as elaborate as GM and Honda’s. In 2005, BMW joined Honda and GM in working jointly on fuel cell technologies.