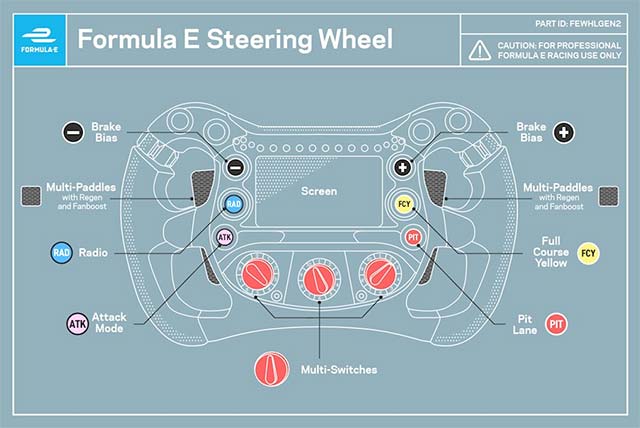 In And We Go Green Formula E documentary, former champion Lucas di Grassi (Audi Sport ABT Schaeffler) likens Formula E to playing chess at 280km/h, as the drivers balance everything from race strategy to when they need to attack or defend. So, their steering wheels are an essential weapon on the battlefield.

With 24 individual drivers on the grid, each wheel is adapted to their racing style. As all the teams’ specifics differ a little, here is a broad understanding of what the drivers face when scrapping within inches of each other and the walls of the demanding street circuits.

Starting at the multi-switches, these offer a range of mappings for the drivers to apply on the fly, giving them immediate access to different settings for the various strategies and managing energy throughout a 45 minute plus one lap E-Prix.

The drivers are having to juggle all of this whilst battling their rivals on circuits lined with walls, and the Nissan e.dams pairing of Sebastien Buemi and Oliver Rowland are both in agreement that the multi-switches are among the most complex components on the wheel – opening access to dozens of variables.

“This is probably the most complicated one,” opens Rowland. “As you’ve got 10 different things to change with maybe 20 options in them!”

DS Techeetah’s Antonio Felix da Costa also highlighted that one of these switches is home to one of his favourite modes – the full 250 kW of power, on-tap for a flying qualifying lap.

ATK is for ATTACK MODE. Used during the race, ATTACK MODE gives the drivers an extra 35 kW of power. This button needs to be pressed when entering the activation zone. Misjudge it, and the drivers not only lose that additional power boost but also time and even race positions – it’s a high-risk move.

Interestingly, on its wheel, DS Techeetah has this labelled up as MK or ‘Mario Kart’ as the Franco-Chinese squad call back to videogame-esque speed boosts that come with engaging ATTACK MODE.

All drivers love more power, and this button is a particular favourite of Buemi: “ATTACK MODE is the one I prefer because you get a bit more power out of it!”

RAD is not labelled because – as Da Costa points out – he likes to be “rad” on-demand – which we’re not discounting of course – but it enables the radio which has a far more important job in giving him a direct communication channel to his team.

Drivers are in constant communication with their race engineers throughout an E-Prix, keeping them updated with all the information presented on the screen or calling out when they need support in the heat of the moment.

As Rowland points out: “It’s really important, sometimes we need help during the race and also a little bit of advice. Without my engineer, I don’t think I’d be able to do the same job.”

Don’t forget, you can also listen in and hear all the chatter, unfiltered, via the Formula E App.

Adding further complexity to the wheel are the paddles on its rear. Arguably the most important of those are dedicated to regen.

Before the drivers have even considered braking for turns, they need to lift and coast into a corner. By pulling this paddle, energy can be re-captured through the rear axle and ultimately recharge the battery whilst slowing the car down. The brake pedal can then be used for extra stopping power as required.

Battery usage is a well-calculated game in Formula E, and with drivers running close to empty at the end of the race, this paddle is key to ensuring they can continue fighting right up to the chequered flag.

There’s a set of plus and minus options on the wheel for rapid changes to the strategy, too, and these are connected to the option selected on the switches.

Depending on how they’ve been set up, there is also launch mode for race starts and FANBOOST that can be activated through a paddle.

The plus and minus buttons on the wheel adjust the brake bias, transferring the braking ratio between the front and the rear brakes.

This means that the drivers can adapt the brake balance whilst on the move, ensuring they get the suitable stopping power for each turn on the track.

Too much towards the rear and the car will spin. Too much up-front and the car will be difficult to turn in. Both of which are daunting prospects with drivers surrounded by intimidating walls on either side.

Da Costa says: “When I press these buttons I can send the brake bias to the front or the back depending on what I’m feeling for each corner. It’s so useful for me – I can adapt this to every corner as I am driving.”

The information centre on the wheel. Here the drivers are immersed in heaps of data, including tyre pressures, brake temperature, speed and power, the state of the battery, range and energy consumption.

With no telemetry back to the garage, this screen is important as throughout the race, drivers regularly report information to their teams so they can best advise on strategies, offering crucial feedback and support.

For Da Costa, the dashboard contains a lot of top-secret information that he wasn’t prepared to reveal, but he did add: “We have a lot of information in there, which helps me run my race and really plan a little bit ahead.”

The FCY and PIT buttons are found in all the of the cars and both of these act as speed limiters to ensure that the drivers are at the safe speed when the circuit is under a full course yellow situation or when entering and leaving the pits.