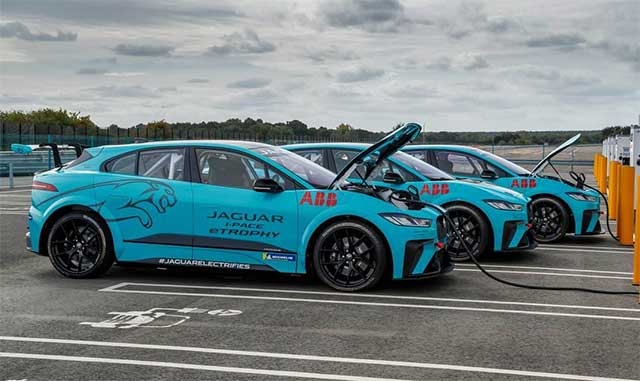 As part of this partnership, ABB will provide custom-made, compact fast chargers for each of the participating teams in this new electric racing series. The Terra DC fast chargers were specially designed for the series and are capable of quickly charging the Jaguar I-PACE eTROPHY racecars in the short breaks between practice, qualifying and the races.

The compact design also allows for the chargers to be easily transported to the series’ 10 rounds, keeping freight to a minimum. The partnership builds on ABB’s role as title sponsor of the ABB FIA Formula E Championship and extends the company’s commitment to support and expand the future of e-mobility.

The Jaguar I-PACE eTROPHY is the world’s first all-electric, production-based racing series. It will take place on the same weekends and on the same city street circuits as the ABB FIA Formula E Championship. The series, which will exclusively feature up to 20 Jaguar I-PACE eTROPHY racecars, will give participating teams the chance to showcase racing talent and performance, while competing on the world stage in zero-emissions motorsport.

ABB’s Terra HP fast charger is capable of providing a typical electric vehicle with 200km (125 miles) of cruising range in just eight minutes, about the same amount of time it takes to fill up a car at a conventional gas station.

In a related news, Jaguar Racing have revealed a new wave of drivers who will take part in the inaugural Jaguar I-PACE eTROPHY.

The initial teams to join the championship took delivery of their Jaguar I-PACE eTROPHY race cars at the first official acclimatisation test of the new support series to the ABB FIA Formula E Championship, held at Silverstone last month.

Further multi-car teams from China, the Middle East and Europe will announce details, including their drivers shortly. In addition, a team from Germany attended the acclimatisation test and are due to announce their team name and driver in the coming weeks.

The acclimatisation test provided the first teams and drivers the opportunity to test the all-electric race cars’ dynamic performance capabilities for the first time at the Silverstone Stowe circuit. Drivers met the eTROPHY engineers and technicians, enabling them to start developing race set-up and strategies ahead of the inaugural race in Ad Diriyah, Saudi Arabia in December.