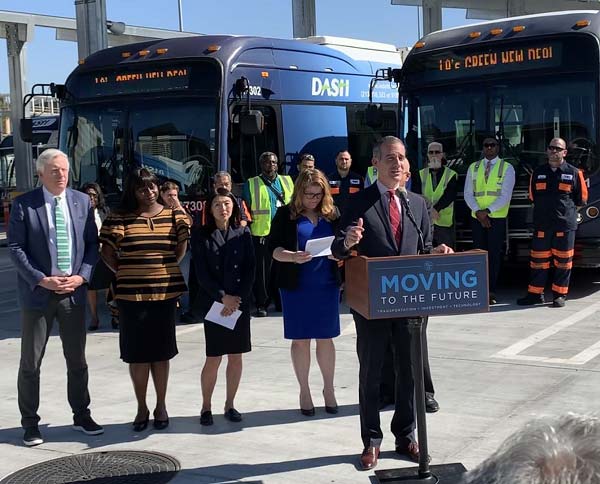 LA Mayor Eric Garcetti announced this week that the Los Angeles Department of Transportation (LADOT) placed the largest order for electric buses in U.S. history  — 134 of them will come from BYD.

“The clean transportation revolution is not a distant dream — it’s happening on L.A.’s streets right now,” said Los Angeles Mayor Eric Garcetti, who spoke to dozens of LA reporters and city workers after quietly arriving at the Department of Transportation in a 30-foot BYD electric bus. He praised BYD for its building the fleet of “all-American buses In Los Angeles County with an “All-American” workforce.

“BYD has its American headquarters here in Los Angeles,” he said. “We’re happy that we are doing this together.”

“This is very significant,” she said. “This is not a small order of 20 electric buses, this not a demo anymore. This is the real thing. It is moving on L.A. streets every day. They have been here four years already and the city can see these buses are reliable.”

Li also thanked Garcetti for his acknowledgement of the BYD workforce.

“We feel we represent the future and are here for the long term,” Ms. Li said. “BYD offers good paying jobs to veterans, single parents and men and women who have been in jail, and we see they are thriving. This is an example of BYD doing its work as a global leader.”

Garcetti also spoke of the future.

“Seeing these zero-emission buses rolling down our roads in the years ahead will bring us one step closer to realizing our vision of cleaner air, lower emissions, healthier communities, and a more sustainable future for all Angelenos,” Garcetti said as he stood in front two of the four BYD buses that have already been delivered to the city. In all, Los Angeles will have 134 BYD electric buses, Garcetti said.

Garcetti made the announcement at the Los Angeles Department of Transportation’s new bus maintenance yard. The three-acre facility sports solar panel canopies and EV charging infrastructure, and can hold up to 70 buses at a time.

“If we do not get off fossil fuels, we are killing our kids and their planet,” L.A. Councilman Mike Bonin said. “Fortunately, Los Angeles has the ability to make a big impact in combating the climate crisis. Moving to a fleet of electric buses is an important step.”

Importantly, BYD can help Los Angeles achieve its goals in a timely fashion.

“We applauded LADOT for its bold leadership, ambition, and desire to improve the air quality for the City of Los Angeles,” said Stella Li. “BYD buses will be an important component of the city’s efforts to meet its sustainability goals. We are proud to partner with an agency that shares our green dream.”

“Los Angeles is making a bold investment in a clean transportation future,” LADOT General Manager Seleta Reynolds said. “These 155 buses will save the city money on fuel costs and improve air quality and health for families across the region we serve.”