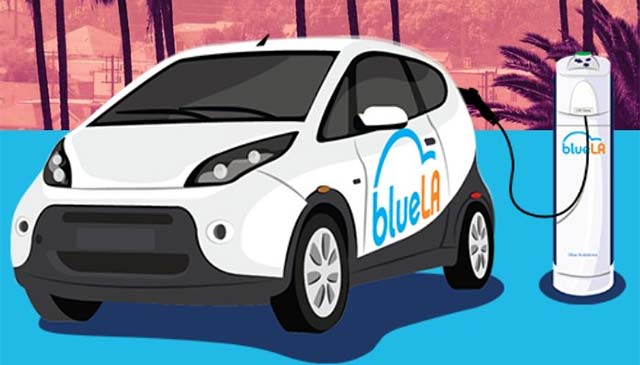 A new electric car sharing program will help Los Angeles meet its clean air goals, reduce greenhouse gas emissions, and provide residents of some of its most disadvantaged communities with self-service access to electric vehicles.

“We have to put sustainability at the center of everything we do in Los Angeles — and putting more drivers in electric vehicles is a good way to clean our air,” said Mayor Garcetti. “The BlueLA EV car share program puts California’s cap-and-trade dollars to work to not only help meet the Paris Climate Agreement goals to reduce greenhouse gas emissions and advance the EV goals in my Sustainable City pLAn, it brings new transportation options to neighborhoods that need them.”

The program is funded in part by a $1.7 million grant through California Climate Investments (CCI), a statewide program that puts billions of cap-and-trade dollars to work reducing greenhouse gas emissions, strengthening the economy, and improving public health — particularly in disadvantaged communities.

In 2015, Los Angeles won a CCI grant to pilot electric vehicle car sharing in low-income communities. Blue Solutions’ subsidiary, BlueLA Carsharing, is working with the Los Angeles Department of Transportation (LADOT) to bring the program online this year. Implementation and outreach efforts are supported by the Shared Use Mobility Center (SUMC) and a committee of local community organizations, including the Salvadoran American Leadership and Educational Fund, T.R.U.S.T. South LA, and Koreatown Immigrant Workers Alliance.

Until the full service is available for public use later in the year, the Pico Union station will be used for community outreach, drive and ride events, and efforts to raise awareness about electric vehicles. Ultimately, the service will bring 100 electric cars and 200 chargers to self-service stations across the city, available to anyone 18 years or older with a valid driver’s license.