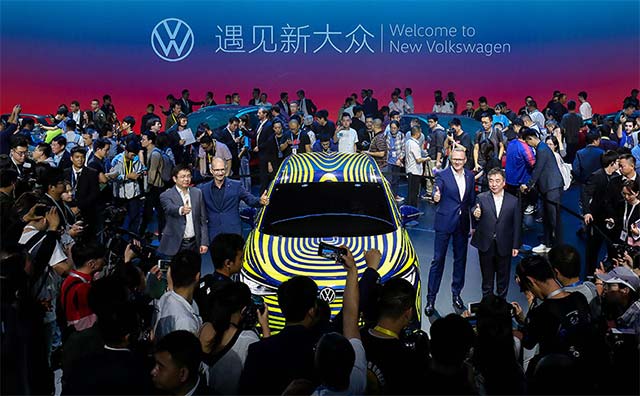 Volkswagen established its first business relations with China more than 40-years ago. Carl Hahn, then Chairman of the Board of Management, recognized the potential and set the course for the company’s success in the country, which was only just opening up. A little later, the Group was one of the first international car manufacturers to launch its vehicles on the Chinese market. Thus, the success story took its course.

Volkswagen has since sold more than 42 million cars in China. Today, Volkswagen Group sells around 40 percent of its cars in China. One-in-five cars sold in China bears the logo of a Group brand.

Now, as part of the Group’s E-offensive, the “second home market” will become even more important in the coming years. This is also expressed in terms of direct figures: Up to 2028, the Group plans to sell 28 million battery electric vehicles (BEV) worldwide, more than half of them in China.

Because nowhere are the conditions for e-cars better than in China. In 2018, combined manufacturer sales reached over one million e-cars in the People’s Republic for the first time, more than half of total global production during the same year. “People’s mindsets and government policies are more focused on electric cars than in any other country,” says CEO Herbert Diess. “More and more cities, especially the mega-cities like Beijing and Shanghai, are supporting them with special benefits.”

It is true that financial subsidies for customers to purchase e-cars are currently being reduced in order to allow the explosive increase to mature into qualitative growth. However, electric cars continue to offer some compelling advantages to encourage more and more Chinese customers to buy an electrified vehicle: electric cars are not banned from driving in large cities – as is the case with vehicles with combustion engines on certain days. In addition, purchasers of an electric car can obtain registration documents faster than for conventional vehicles. And they can use their own dedicated lanes in many places.

“A healthy market cannot be based on financial incentives,” says Stephan Wöllenstein, CEO of Volkswagen Group China. “Therefore, the reduction in subsidies for electric vehicles will benefit the market in the long-term.” Quick profit is no longer necessary. This will encourage manufacturers to step up research and development of electric vehicles and make them more competitive and better. Instead of rapidly putting many electric cars with disappointing quality on the roads, the Chinese government will in future focus more on quality when it comes to electric cars.

And on the manufacturer side too, government regulations underscore the importance of the topic of electromobility: in order to increase the share of electrified vehicles as a proportion of total sales, the government has introduced a quota for all manufacturers with a points system for e-cars. This complex quota is based on the following principle: depending on the degree of electrification, a manufacturer receives corresponding points for each vehicle sold – the full number for pure-electric vehicles. Technical factors such as range and battery density are also taken into account when awarding points. The bottom line is that a certain quota of points must then be achieved by e-vehicles in the overall fleet. And this quota will rise over the next few years. If a target is not met, there is a threat of sanctions, in the worst case a production stop.

Since the middle of last year, when purchase subsidies were partly abolished, the Chinese electromobility market experienced a negative trend for the first time. “Customers must now be made aware of the numerous advantages of electromobility in other ways,” says Stephan Wöllenstein. On the one hand, through increasingly attractive e-cars, and on the other hand through bundled and intensified incentives such as the free allocation of license plates, free parking, no day-dependent driving bans and dedicated e-car lanes.

“Such incentives must be adapted even more closely to customer needs in order to enable healthy growth in the e-car market again,” he demands. “In the long-term, however, we are certain that the market will continue to grow.” At the same time, it should also be ensured that worries about charging facilities will soon be a thing of the past. Volkswagen already supports this with its CAMS joint venture, which promotes private wall boxes and public charging stations.

By 2028, more than half of all e-cars sold globally will be in China

2020 will be a key year for electric mobility in China – just as it will be for Volkswagen. This year, the SAIC VOLKSWAGEN plant in Anting and the FAW-Volkswagen plant in Foshan will start manufacturing vehicles on an MEB basis with an annual production capacity of around 600,000 pure electric vehicles “Made in China”. The local MEB production is then to be expanded to 15 different MEB models across different brands by 2025. And by 2035 half of all cars sold are to be equipped with electric drive systems (NEV – New Energy Vehicles).

This year, the Volkswagen brand is introducing the fully electric ID. Family in China, and hybrid versions will also be available for several established models by 2020. Audi is bringing the e-tron to China and Porsche is coming to China with the Taycan.

“I am looking forward to this year in which our local e-car production will increase significantly in volume. Success in electromobility is a key factor in achieving our sustainability goal of being carbon neutral by 2050,” says Stephan Wöllenstein.

In addition to an increasing number of electric cars in the fleet, the focus is also on resource-saving production. The first step is therefore to optimize the ecological footprint at all 33 Chinese production plants of Volkswagen and its partners. By 2025, all plants are to produce 30 percent less waste per vehicle and save energy and water to the same extent.

Both partners benefit from the mobility turnaround and the sustainability strategy: Volkswagen is helping Chinese megacities to reduce their pollution levels. And for Volkswagen, China’s market size alone is decisive in helping its e-offensive, and thus electromobility as a whole, to be successful globally.

There are currently about 173 cars for every 1,000 people in the Middle Kingdom. In Germany, vehicle density is almost four times as high, in the USA even five times. If increasingly more Chinese people move up into the middle class – as is expected to happen – the demand for individual mobility will also increase. This growth will be reflected in higher demand for mobility services and an increase in private vehicles in China’s many up-and-coming “smaller” megacities.

The potential of the Chinese market is therefore huge. That is why Volkswagen Group China, together with its local partners, will continue to invest in China – over four billion euros in 2020. Around 40 percent of this investment will go into electromobility – into the production, infrastructure, research and development of electric cars.

“The Chinese car market is of crucial importance for Volkswagen’s success. We want to consolidate our leading role through local partnerships and intensified development work in the country,” emphasized Herbert Diess. Volkswagen has therefore merged the Group’s research and development departments with those of the Volkswagen and Audi brands in Beijing. In future, more than 4,500 engineers will work together on future technologies such as autonomous driving, digitalization and connectivity, as well as design.

“China is the world leader in digitalization and intelligent mobility technologies. Our research and development department is tapping into new technologies through cooperation with strong Chinese partners and investigating trends that are relevant to the automotive sector. The car of the new decade will be largely determined by China,” says Stephan Wöllenstein. The close integration of local research and development capacities is intended to anchor Volkswagen even more firmly in the Chinese market. Volkswagen is thus setting the decisive course for success in the future.