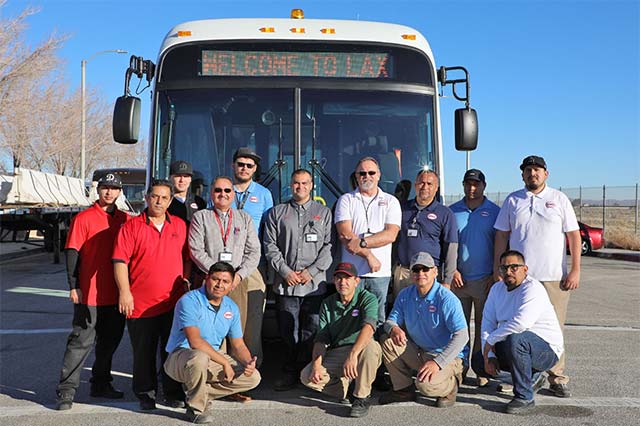 The electric buses will be used to provide transportation for guests traveling between terminals and gates on the Los Angeles International Airport’s airfields.

“The 400th American bus is another great milestone for our Lancaster team,” said BYD North America President Stella Li. “Since delivery of our first American battery-electric bus from Lancaster in 2014, BYD has provided buses to customers in 14 states and four Canadian provinces. We are passionate about our mission to create a cleaner environment here in North America and across the globe.”

In just six years, BYD has grown to become the largest battery electric bus manufacturer in North America, with more than 750 employees. The company has expanded its Lancaster manufacturing plant, a former motorhome manufacturing facility, from 100,000 square feet to over a half million square feet.

In all, BYD has invested more than $250 million in North America, and in 2018 alone, has spent $70 million on components and services from American vendors.

BYD buses are a win-win for riders, bus operators, and the environment. Riders get a comfortable, quieter ride while operators get vehicles with fewer moving parts and lower fuel and maintenance costs.

The environment benefits from the fact there are no polluting emissions. The U.S. Department of Transportation’s website states that every zero-emission bus eliminates approximately 1,690 tons of CO2 over a 12-year period. This is equivalent to taking 27 cars off the road. These buses also eliminate approximately 10 tons of nitrogen oxides and 350 pounds of diesel particulate matter.

When it comes to zero-emission transportation, BYD brings innovation and cutting-edge technologies to forward-thinking communities and private enterprises. The first pure electric vehicle manufacturer in the U.S. to have an all-union workforce and a pioneering Community Benefits Agreement, BYD’s Lancaster, Calif., team includes a growing number of women, veterans and second-chance employees.