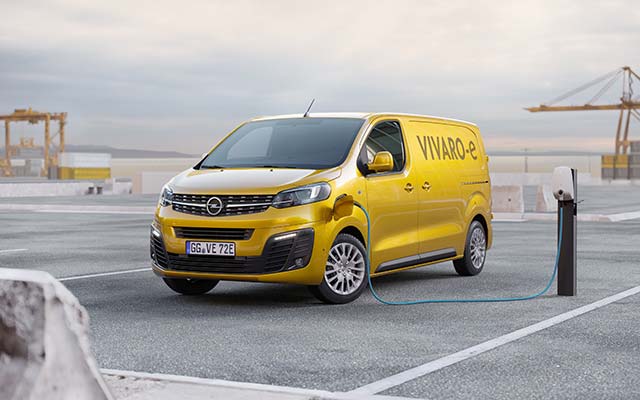 The electrification offensive from Opel continues: as of 2020, the Opel Vivaro will also be offered as a pure battery electric version. Customers can then choose between two sizes of battery, depending on their needs.

The new Opel Vivaro-e will be available with a 50kWh battery for a range of up to 200 kilometres or a 75kWh battery for up to 300km according to WLTP. Emissions-free deliveries are becoming increasingly important in urban areas and the demand for purely electric light commercial vehicles will rise accordingly.

The Vivaro-e is based on the group’s highly variable EMP2 platform, which enables the use of conventional as well as electrified powertrains. The Vivaro-e extends Opel’s range of particularly efficient light commercial vehicles. The next electric LCV – the Opel Combo-e – will arrive in 2021.

“Opel is going electric. All Opel models will be electrified by 2024,” said Opel CEO Michael Lohscheller, “customers can then choose an electric variant of each model. Electrified LCVs will be especially important for the ‘last mile’ in urban areas, for example, as a people carrier or delivery van. That is why I am very happy that the Vivaro-e will already become available next year, while the electrified versions of the Opel Combo Life, Combo Cargo and Zafira Life will arrive in 2021.”

With the new Opel Vivaro-e, the German brand will continue a success story that began with the first generation of the vehicle in 2001. The Vivaro A was offered until 2014, principally as a shuttle bus, panel van and platform truck. Opel delivered more than 650,000 units to customers during this period. In 2014, the second generation was introduced, of which Opel had sold around 310,000 vehicles by the middle of this year.

The Opel Vivaro number three arrived at dealerships a few weeks ago. The multi-functional LCV is now available in three lengths instead of two (4.60 metres, 4.95m and 5.30m). Compared with its predecessor, it also has a 200kg higher payload (up to 1,400 kilograms) and can pull half a ton more (trailer load up to 2,500kg). Most versions of the new Vivaro are also only 1.90m high and can therefore access underground parking. Comfort for the driver and passengers has also increased.