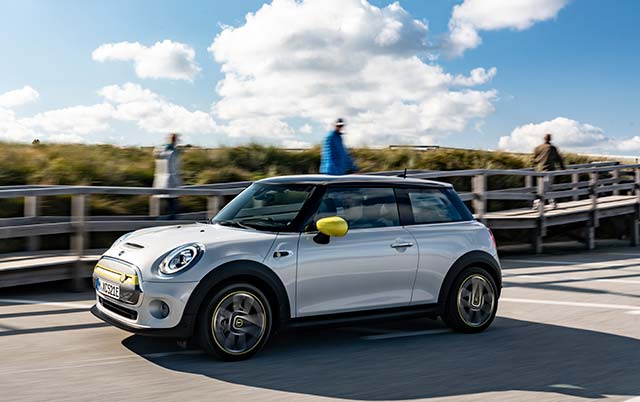 Thanks to the latest battery-cell technology, the new MINI Cooper SE accomplishes both the way and the return on a weekend trip from Hamburg to Sylt without a charging stop.

City traffic is really its forte but sometimes the MINI simply has to get out and about. Enjoying some fresh air, shaking off the everyday blues – a day’s excursion or a weekend trip generally does the trick.

In northern Germany, the MINI is usually drawn to the coast, a region where “moin” is generally the right greeting whatever the time of day. There’s almost always a refreshing breeze, and large numbers of wind turbines are making a significant contribution to the energy turnaround. In this landscape, the first all-electric model from the British premium brand is naturally enough a particularly good fit.

And thanks to the latest battery-cell technology, there’s no impediment to taking the new MINI Cooper SE on the short trip from the Hanseatic city of Hamburg to the island of Sylt in the North Sea.

In fact, with its range of between 235 and 270 kilometres, the new MINI Cooper SE is absolutely ideal for getting out of town, and enjoying local zero-emission driving fun through the surrounding countryside. Powered by its 135 kW/184 hp electric motor, the car only reaches its limit on fast-moving motorway stages at 150 km/h – an artificial limit established for reasons of efficiency. The energy required for this is provided by a high-voltage battery designed specifically for this model and with the latest cell technology delivering gross energy content of 32.6 kilowatt hours. It is made up of twelve modules arranged in a T-shaped configuration deep in the floor of the new MINI Cooper SE. The volume of the luggage compartment of between 211 and 731 litres is consequently just as big as in the conventionally powered MINI 3-door automobile.

The trip to Sylt, or “to the island”, as it is known by local people from Hamburg, can commence with fully charged battery and comfortably stowed weekend luggage. A journey of just under 200 kilometres takes you from the Hamburg city limits to the holiday island located at the top left-hand side of a map of Germany, although the all-electric MINI will not have to do the last leg of the journey under its own steam. In Niebüll, it is loaded onto the Sylt Shuttle run by German Rail. The train rattles to its destination on the single-track causeway along the Hindenburg Dam. The mud flats can be seen stretching for kilometres on end to the right and left, while the remaining kilowatt hours stored in the battery of the new MINI cooper SE can be saved for an introductory foray across the island.

Naturally, enough electricity is also available on Sylt. And contrary to a lot of other things, power is no more expensive than on the mainland. The most valuable commodity here is time. Every minute on Germany’s northernmost island deserves to be savoured. And the best way to enjoy that time is to embark on an excursion among the wonderful world of dunes. There are no electric sockets for miles and miles but the energy generated by the waves and the wind is a very real presence.

Anybody who wants to get to know Sylt needs to experience both sides of the island. There is the dune landscape with kilometre after kilometre of sandy beaches stretching from Hörnum in the south to the “Elbow” spit beyond List in the north. Then there is the side of the island bordering the mud flats with their lush green meadows, the fashionable Hanseatic town of Keitum and picturesque harbours like Munkmarsch. The busy streets of the island’s capital of Westerland, the stylish bars and traditional restaurants in Kampen, and the untouched natural world on the Morsum cliff are best explored on foot, while the MINI Cooper SE is connected to the power grid to have its batteries charged for the return journey. Three and a half hours connected to a wall box are sufficient for a full charge – but nobody wants to be in a hurry on Sylt. A conventional household electricity socket is also sufficient. And if you happen to be in a tearing hurry, the battery of the new MINI Cooper SE can be recharged to 80 percent at a quick-charging station with power of up to 50 kW in just 35 minutes.

Most visitors can never get enough of the fresh air on the North Sea. A diversion is therefore selected for the trip back home. From List, a ferry takes visitors back to the mainland. It makes a stop on the Danish island of Rømø. Insider information: A charging station has been installed on board the “Sylt Express” and this allows the MINI Cooper SE to recharge its high voltage battery with electricity right “to the brim”. The crossing lasts 40 minutes and is quite long enough. The additional charge of electricity is included in the price of the crossing.

Recharged with new vigour, the MINI Cooper SE rolls along the causeway that connects Rømø with the mainland and then travels south across the border between Denmark and Germany. The all-electric car is particularly economical in its GREEN+ drive mode. Additional range can be gained with the accelerator response optimised for efficiency and deactivated heating or air-conditioning. Just before the Dithmarscher Geest motorway parking layby, a wonderfully long right-hand bend on a slight ascent encourages a rather higher speed. Ultimately, the vehicle’s low centre of gravity means that the MINI Cooper SE hugs the road. Otherwise, it cruises along and on the descent from the bridge over the canal between the North Sea and the Baltic, the batteries can even undergo modest recuperation.

The car then continues its journey to the centre of Hamburg. A multicoloured sea of light along the Reeperbahn entertainment mile gives the impression that electricity is limitless. Conversely, it’s about time the MINI Cooper SE was recharged. Fortunately, the Hanseatic city has a relatively good supply of charging stations and it’s easy to find a parking space with a charging point, with a bit of luck near the harbour. You never know, maybe the driver would like to breathe in a bit more bracing sea air.