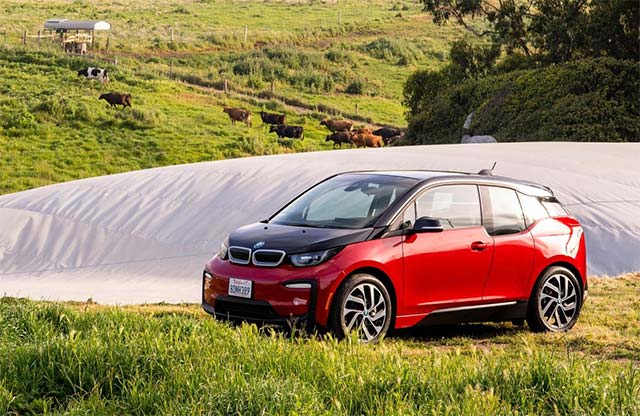 When the BMW Group started producing electric vehicles, the objective was to make sustainability a core component not just of the cars themselves, but of every element from design to engineering, supply chain to manufacturing. Now this holistic approach to sustainability extends to the electricity that goes into the cars as well.

Now, the BMW Group and Straus Organic Dairy Farm announced a partnership that will reduce emissions of greenhouse gases from farming while simultaneously delivering the cleanest possible fuel to EV drivers in California. When owners plug in their cars to charge, they will be helping to bring new renewable energy to dairy farms throughout the state.

A methane biodigester at Straus Organic Dairy Farm in Marshall, California, captures methane from cow manure, which would otherwise enter the atmosphere as a powerful greenhouse gas. This methane captured from the cow manure is transformed into renewable energy, which is exported to the public power grid, replacing the need for fossil fuels. By delivering a ‘double’ emissions reduction, biodigesters can produce electricity that has negative carbon intensity, according the California Air Resources Board.

“This collaboration is the first of its kind in the auto industry,” said Bernhard Kuhnt, president and CEO, BMW of North America. “It is a perfect fit for the BMW Group, which has long valued creative technologies and partnerships that can contribute to reducing greenhouse gas emissions.”

“With the current climate change crisis; the relationship that we’re forging with BMW is essential,” said Albert Straus, founder and CEO of Straus Family Creamery. “In addition to being a great collaboration, we are developing the blueprint for a model that can generate revenue for other farmers throughout California.”

Over the coming years, the BMW Group anticipates that the renewable energy generated by partnerships like this will equal the electricity needs of every BMW and MINI electric vehicle in the state of California. “We are well on our way to ensuring that every electric mile driven by BMW and MINI owners in California is covered,” said Adam Langton, BMW USA Energy Services Manager.

For the BMW Group, this initiative is yet a further step in facilitating the use of renewable energy for electric vehicles. The BMW ChargeForward pilot program, which operates in the San Francisco Bay Area of California, makes it possible for participating owners to charge their vehicles with as much solar energy as possible, while also helping the stability of the public electricity grid.