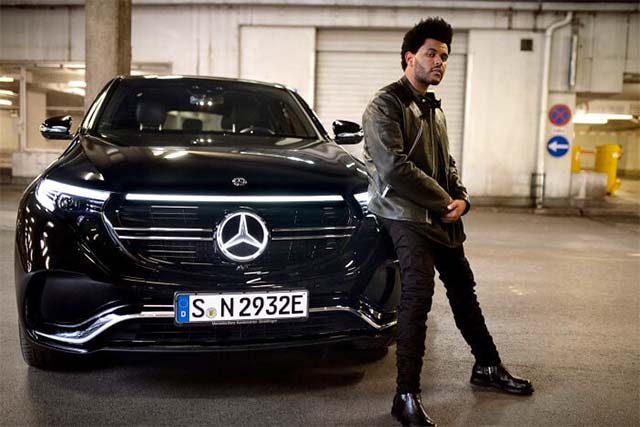 November sees the start of the advertising campaign “Enjoy Electric.” for the market launch of the Mercedes-Benz EQC with various moving image formats and a major print and online communication initiative.

The teaser phase leads to the launch of the campaign on November 29, where the EQC Webspecial with campaign content will go live on mercedes-benz.com. The departure into a new era is to the fore: the brand with the star looks back at a history, stretching back 133 years, of innovation, development and progress – the introduction of the all-electric EQC is the logical next step.

The heart of the campaign is the TV ad, a long-format campaign film and in addition four product films that will be available on the Mercedes-Benz social media channels. Mercedes-Benz was able to have Global Diamond Certified R&B star The Weeknd involved. Over and above his performing role in the films, he co-developed the campaign as its Creative Director.

The videos describe the EQC with its characteristic Mercedes-Benz qualities such as quality, safety and comfort. This is expressed by the campaign film with The Weeknd as the main protagonist.

In the long version of the film, which will go live on November 29, The Weeknd is notified via app that the vehicle’s battery is charged and the EQC is ready to go. The ornate set design puts the viewer in past times and makes him reminisce – always connected with extraordinary Mercedes vehicles and the feeling of pure life enjoyment. The entire story of the Mercedes-Benz EQC campaign film with the celebrity protagonist The Weeknd can be seen the campaign film on Mercedes-Benz YouTube on November 29.

The campaign has been created in several lengths (20, 30, 60 and 140 seconds) to be shown in various ways. In addition to the clips that are already available online, the corresponding TV ads will be broadcasted on German television and internationally from November 29.

“This is a special moment for the entire Mercedes team: with the campaign on the EQC we are entering the era of electric mobility”, says Bettina Fetzer, Vice President Marketing Mercedes-Benz Cars. “The campaign takes emotional experiences of our customers with iconic Mercedes vehicles and shows how we are reinterpreting them in the electric EQC in the present day. A completely new driving feel, pioneering spirit and sustainable, modern luxury are at the core of our EQC communications.”

The Weeknd is a Grammy Award-winning, multi-Platinum and Diamond-certified recording artist and founder of the visionary XO collective. Filtering R&B, pop and hip-hop through an ambitious widescreen lens, The Weeknd has redefined all these genres and solidified his iconic status with successes spanning record-breaking chart triumphs. From his early mixtapes that later morphed into a 2X RIAA-certified Platinum project, The Weeknd has gone on to make three albums and an EP that have garnered over 35 billion global streams and 9 billion YouTube views. In addition to three Grammy Awards, he has also won nine Billboard Music Awards, two American Music Awards, ten Juno Awards and has been nominated for an Academy Award. The continuous record breaking of charts, sales and streams, headlining the biggest festivals and stadiums in the world, and his ever mysterious public persona combined solidifies The Weeknd as one of the most compelling and significant artists of the 21st century.

“We are delighted about the collaboration with Abel Tesfaye, better known as The Weeknd“, says Bettina Fetzer, Vice President Marketing Mercedes-Benz Cars. “The cooperation was inspiring and gave us lots of new and creative impetus. Abel’s talent as the creative director and performer is the right combination for this unique Mercedes moment on the road to an electric future.”

Further features of the campaign: an extended web special, additional snippets, social media assets such as a Tik Tok Challenge and the Instagram extension “If I had lived today”. In this, the protagonists go on a journey through time and introduce themselves, among others Carl Benz, would deal with today’s technical possibilities and social media tools. The campaign is completed by extensive print motifs.

The campaign films were produced by the production firm Iconoclast Germany GmbH.

In keeping up with the overarching campaign mechanism the print motifs also show various EQC moments focussing mainly on the ease of electric driving. The motifs were produced by the French photographer Cédric Viollet. Among others, he works for international fashion and lifestyle media.

The EQC is the first Mercedes-Benz model under the product- und technology EQ brand on the roads. With its seamless, clear design and colour highlights typical of the brand, it is a pioneer for an avant-garde electric look while representing the design idiom of Progressive Luxury. With respect to quality, safety and comfort the EQC is the Mercedes-Benz among electric vehicles, and highly impressive in the sum of its attributes. These elements are accompanied by dynamic performance, thanks to two electric motors at the front and rear axles with a combined output of 300 kW. Thanks to an ingenious operating strategy, an electric range of 445-471 km (276-293 miles) (NEDC) is possible. EQ offers comprehensive services and makes electric mobility convenient and practical for everyday use with Mercedes me. The EQC also symbolises the start of a new mobility era at Daimler.

The EQC campaign is a module in holistic and newly conceived marketing communications for Mercedes-Benz EQ. Cooperation with personalities who are shaping the mobility of tomorrow together with Mercedes-Benz plays a key role here. A case in point is The Weeknd, who is known as a role model for the young generation and addresses a new target group which is ideally suited to EQ. Pioneering spirit and the courage to take new routes inspire authentic communication. Contemporary, sustainable luxury is more than a vehicle and links the products, services and brand experiences with the feeling of ease.