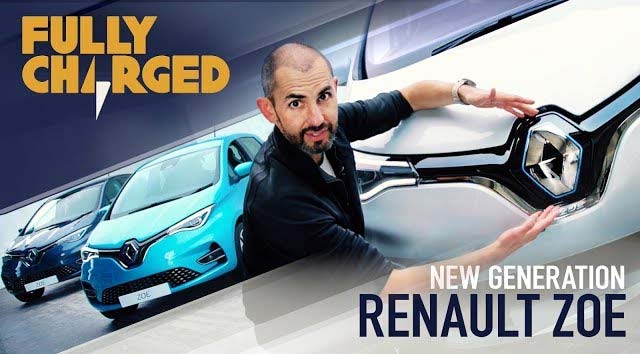 It’s time for the new Renault ZOE Z.E.50 to be reviewed by Fully Charged Show. No test drives have been made of the new Renault ZOE Z.E.50 electric supermini yet, but Jonny Smith heads to Paris, France, in another 4k review for the Fully Charged Show to explore the vastly improved dashboard, connectivity, 50kW fast charge ability and minor exterior tweakage of this already impressive and relatively cheap electric car.

The new ZOE benefits from the new 52 kWh Z.E. 50 battery, which takes the useable range up to 242 miles (WLTP), which is an increase of around 30 percent over the old 40 kWh pack. It now also offers fast direct current (DC) charging, in addition to the alternating current charging (AC) options already available at home or on the street.

Despite the increase in range and capacity, the battery has not increased in size physically, meaning no loss of interior space and practicality. Another benefit of Z.E. 50 is its ability to deliver more performance from the new R135 motor.

At its launch in late 2012, the first ZOE with its 22 kWh battery offered around 93 miles of real range, a range that already far exceeded the daily distance traveled by the average European driver. In 2016, Renault launched the second generation of ZOE with its 41kWh Z.E. 40 battery that doubled the real world range to 186 miles (300 km).

For the new ZOE, engineers focused on the architecture of the lithium-ion battery and the different aspects of its design, achieving an impressive 52 kWh within the same physical cell size. This translates to a 30% increase in range, to 242 miles (390 km) WLTP.

The new R135 100 kW engine delivers the equivalent of 135 PS and improved torque for faster acceleration and greater responsiveness. Engineers have used the increased-capacity battery of New ZOE (Z.E.50) to get the most out of the Renault developed motor, which packs a healthy 245 Nm from zero rpm and drives through a single speed gearbox, helping the ZOE sprint from 0 to 62mph (0-100 km/h in less than 10 seconds and onto a top speed of 87mph (140 km/h). As an indication of its real world pace the 100kW model can accelerate from 50 to 75 mph (80 to 120 km/h) in just 7.1 seconds, which is 2.2 seconds quicker than the 80kW 110 PS R110 engine, which is carried over unchanged.