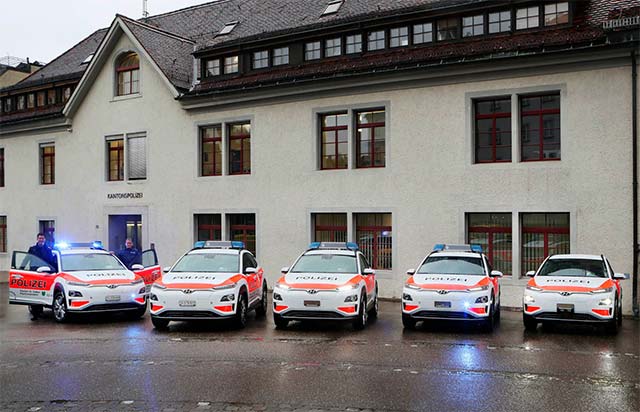 The cantonal police of St.Gallen in Switzerland has added 13 All-New Hyundai Kona Electric models to its fleet of vehicles. Five of the Kona Electric cars will serve in patrol colours, with a further eight ‘civilian’ models to be used for general services.

The decision was made after a selection procedure, in which the Hyundai Kona Electric was the only electric vehicle to fulfil the high requirements: over 100 kW power, over 400 km range, acquisition costs below CHF 50,000 and – of course – availability. The official vehicle handover took place in mid-May 2019.

Naturally, the question of whether a 100 per cent electrically-driven vehicle would prove its everyday worth also came under consideration by St.Gallen’s cantonal police. After rigorous testing, the department for vehicle procurement was satisfied that the All-New Kona Electric met the standards required.

“With the use of electric vehicles, we are fulfilling a cantonal and political mandate, primarily to reduce noise and exhaust emissions. When I see the progress this technology has made, it speaks much more for this purchase. Thanks to more than 100 kW of power, more than 400 km of range, space for five people and significant loading space for equipment, the Kona Electric meets all the requirements for the cantonal police of St.Gallen. Compared to conventional vehicles, the purchase price is set a little higher. However, this is offset by the Kona Electric’s lower maintenance costs and the general upkeep. This means that we are 100 per cent electric and still cost-conscious on the road,” said Hanspeter Krüsi, Head of Communications at St.Gallen cantonal police.

The all-new Kona Electric to be deployed by the cantonal police of St.Gallen will have a range of special features. These include police equipment such as a radio, blue lights and signals. The five patrol vehicles will be available at police stations throughout the canton, while the eight neutral models, which are also fully operational, can be used for general services.

With the Kona Electric, Hyundai is the first carmaker to offer a 100 per cent electric mass-market subcompact SUV in the B-SUV segment. TheKona Electric combines two of the most important trends in the automotive industry: a compact SUV format with an emission-free electric drive.

The more powerful version of the  Kona Electric operates with 150 kW (204 PS), with a maximum range of 449 km (WLTP-certified). Visually, the Kona Electric builds on the expressive, progressive design of the original Kona. Its high everyday life utility value is underlined thanks to its luggage capacity of 332 litres, which extends to 1,114 litres when the back seats are folded down. Hyundai has also positioned the Kona Electric within an attractive price range for prospective buyers (starting from CHF 46,990).