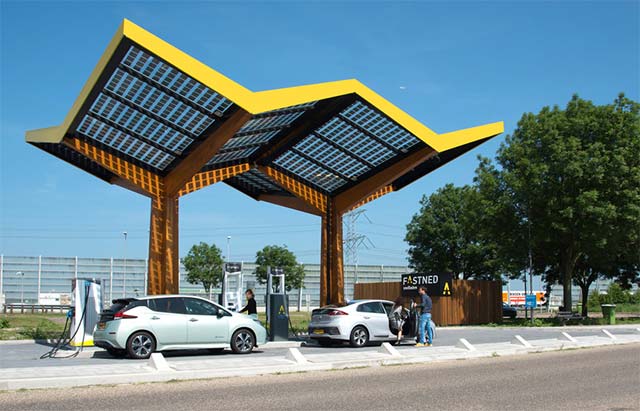 Fastned, a Dutch EV charging company which is building a European network of fast charging stations, won a second tender in the UK led by the North East Joined Transport Committee.

Fastned will build and operate five fast charging stations (hubs) for electric vehicles across the region. Each station will initially house two 50 kW fast chargers (known as “rapid” chargers in the UK) that will deliver 100% renewable electricity.

Fastned intends to build and operate the five fast EV charging stations in Gateshead, Blyth, Whitley Bay, Washington, and Kingston Park. These fast charging stations will enable fully electric cars to fast charge their batteries and will be added to Fastned’s European network. This network currently consist of 88 stations in the Netherlands and Germany and is expanding rapidly. Two other Fastned stations are currently under development in Newcastle and Sunderland as part of the Go Ultra Low NE programme.

The project is co-funded by the European Regional Development Fund (ERDF) and the UK Government’s Office for Low Emission Vehicles (OLEV). The stations will be owned by the North East Joined Transport Committee. Fastned will manage the stations’ design and construction, and operate and maintain them as part of its growing network.

Fastned stations are designed to house multiple 175 kW fast chargers which are upgradable to 350 kW. These high powered chargers are capable of charging EVs up to 100 times faster than at home. Winning this Swiss tender is an important next step towards Fastned’s ambitious goal to build a European network of 1,000 fast charging stations.

With this tender FEDRO aims to provide quality charging infrastructure along the national roads in Switzerland. The sites for the charging stations will be contracted for a period of 30 years. The tender allocated 100 locations in 5 packages of 20 sites. All packages contain locations directly along the motorway and are spread out across Switzerland.