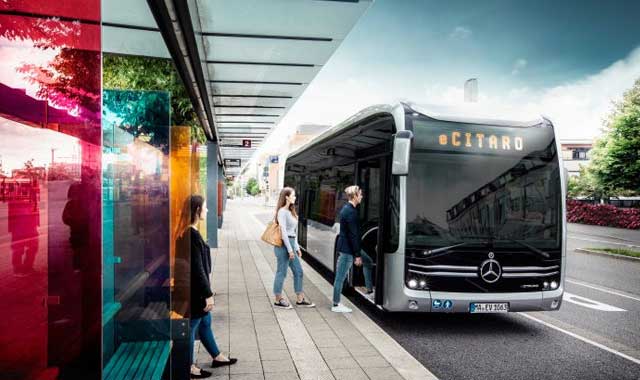 The new Mercedes-Benz eCitaro fully electric city bus has been crowned City Bus of the Year 2019 in Spain. The jury was made up of 46 experts from transport companies and associations, and the vote is run by the Editec publishing house.

After being presented to the world for the first time during the IAA for commercial vehicles in autumn, series production of the vehicle has since started and the first buses have been brought into operation on regular-service bus routes.

The victory in Spain is already somewhat a tradition for Mercedes‑Benz: last year, the Tourismo won the accolade of Touring Coach of the Year.

The new eCitaro uses innovative components only now available for the first time for the eCitaro to achieve a hitherto unknown degree of energy efficiency. The performance of the eCitaro meets most of the requirements of the transport companies even at launch. It is also already prepared for the battery technology of the future.

The powertrain of the new eCitaro is based on the proven and optimised ZF AVE 130 electric portal axle with electric motors at the wheel hubs. The peak output of the motors is 2 x 125 kW, while torque is 2 x 485 Nm. It is an inherent feature of such motors that this is fully available right from the start, ensuring appropriate dynamic performance even with a full complement of passengers.

Lithium-ion batteries with a total capacity of up to 243 kWh provide the power. The batteries are split between up to ten modules, each supplying around 25 kWh. The basic equipment sees two battery modules on the vehicle roof plus four fitted at the rear. Depending on customer requirements, another two or four battery modules are mounted on the roof of the eCitaro.

With the full complement of batteries, the eCitaro with standard equipment weighs around 13.44 t. In conjunction with a gross vehicle weight rating of 19.5 t, this corresponds to a payload of more than six tonnes or around 88 passengers – in line with what is needed in practice even during rush hour.

Operating range figures for all-electric-powered city buses are often difficult to compare. Mercedes-Benz prefers to consider a “worst-case scenario” and therefore takes its direction from the challenging standardised city driving cycle known as SORT2 and includes the energy requirements of the auxiliary consumers in its calculations. According to this, the Citaro achieves an operating range of around 150 kilometres in the summer. This means that even without opportunity charging, the eCitaro already covers about one third of all routes. Under ideal conditions, the eCitaro even drives around 250 km without opportunity charging.