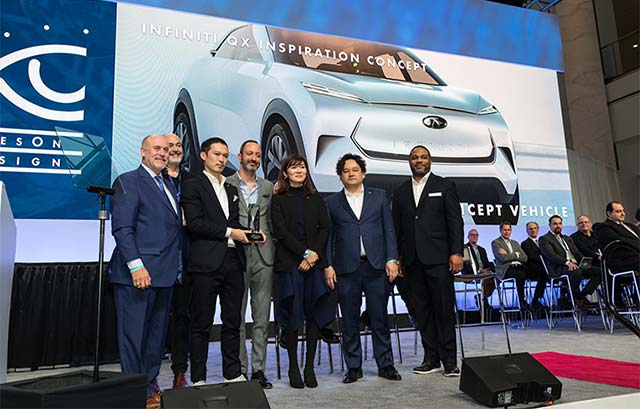 The INFINITI QX Inspiration concept was awarded “Best Concept Vehicle” and “Best Interior” for the second year in a row at the 2019 North American International Auto Show by the prominent collection of automotive designers known as EyesOn Design.

The concept also received the “Innovative Use of Color, Graphics or Materials” award. The QX Inspiration concept combines an electrified all-wheel drive powertrain with SUV body and introduces a new INFINITI form language for the electrified era.

The annual EyesOn Design Awards, given in seven categories, are selected by more than 30 active and retired design heads of automotive manufacturers and transportation design chairs from top art schools. The awards are considered the validation of great automobile design from the industry’s leaders.

“The QX Inspiration is the future of INFINITI and showcases the evolution of how Japanese DNA manifests in our design language in the age of electrification for our premium brand. I am so proud of our design teams in our centers around the world. They work so hard, often in obscurity, on these beautiful designs, and this recognition means so much to them. It is extremely gratifying and I could not be more proud,” said Alfonso Albaisa, senior vice president of global design at Nissan Motor Co., Ltd.

The all-wheel drive QX Inspiration concept signals a new era for INFINITI design enabled by technology, with a form language hinting at the potency and character of electrified powertrains. The new concept sets a direct precedent for the company’s first fully-electric production car, illustrating how new architectures and technologies are influencing modern INFINITI design. It also draws on the Japanese spatial concept of ‘Ma’, demonstrating how open spaces between lines create tension and builds anticipation.

This Japanese DNA continues into the cabin. The interior of the QX Inspiration concept is hand-crafted using traditional techniques and a choice of materials inspired by a subtle Japanese sensuality. The development of new electrified vehicle platforms enables the creation of spacious, lounge-like interiors influenced by ‘omotenashi’, the Japanese approach to hospitality. Providing a seamlessly enabling and instinctive experience, the cabin incorporates technologies to create a welcoming environment, while assisting drivers and connecting occupants to the world around them.

“The QX Inspiration is the manifestation of our electric ambition and is the culmination of three decades of design and technological leadership. It has been literally thirty years in the making. I’m so proud of the design team that found a way to fuse mid-century modern design with Japanese minimalism. Recognition among peers in the industry is the highest form of praise. We are both humbled and grateful,” said Karim Habib, executive design director, INFINITI Motor Co., Ltd.