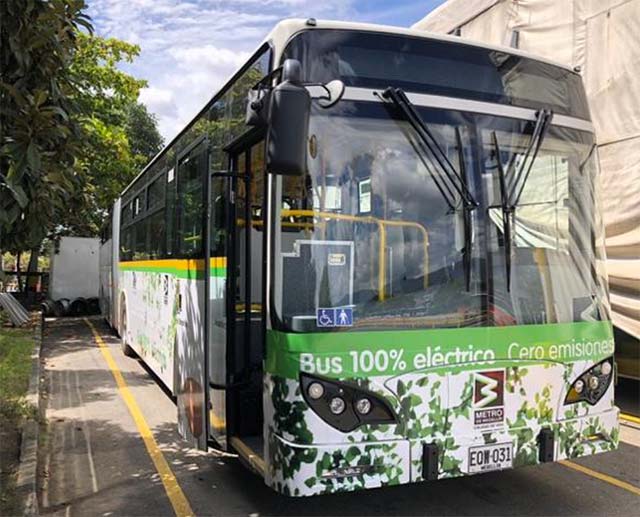 BYD competed with three other electric bus manufacturers, winning the tender with local operator Metroplús (BRT system). BYD’s 12.5-meter K9G pure electric buses will be delivered in the second-half of 2019, accelerating Medellín’s efforts to become the capital of electric mobility in Latin America.

“We will turn Medellín into the capital of electric mobility in Latin America. The tender for electric buses is ready for Metroplus and the city. There will be 64 electric buses, to be operating in August, making this the largest electric bus fleet in the country”, said Mayor Federico Gutiérrez. “We are working together with the rest of the C40 cities to battle climate change,” Mr. Gutiérrez added while making a reference to C40 Cities, a network of the world’s megacities committed to addressing climate change, of which Medellín is a member.

The fleet of buses will be able to cover more than 300km daily, with a capacity of 80 passengers. They will require less than 2 hours of recharging daily, and there will be charging points in different areas of the city to support their operations. Metroplús bought the city’s first 18-metre pure electric articulated bus, BYD K11, as early as 2017.

The articulated bus obtained excellent results during its operations over the last 9 months, in which it covered more than 50,000km. In addition, it demonstrated a 60% saving in costs as well as a 75% saving in maintenance compared to a standard diesel-powered articulated bus. The K11 travelled more than 5,800 km per month, far exceeding daily mileage requirements. Metroplús chose BYD again because of the bus’s excellent economic performance and long range.

Considering the development of BYD in Colombia, it is not difficult to see that the green dreams of the two are highly compatible. In September 2013, the largest pure electric taxi fleet in Latin America consisting of 45 e6s officially hit the streets of Bogota. In September 2015, a BYD pure electric bus was commissioned at Bogota’s El Dorado International Airport, and in December 2015, another BYD electric bus entered the SITP transit system in Bogotá, becoming the first pure electric bus in the country’s bus sector. From 2016 to 2017, BYD delivered two K7 model buses to the Medellin Power Company named EPM. The operation lasted for more than 2 years and received a good response. What’s more, in April 2017, BYD signed an agreement with Localiza, Colombia, to deliver seven e6 taxis, giving Colombia 80 pure electric taxis in total.

BYD has also seen growing demand for its eco-friendly public transport solutions across Latin America. In November 2018, the company received an order for 20 electric buses from Ecuador, and one month later helped the Chilean government launch a fleet of 100 pure electric buses – the region’s largest pure electric bus fleet – in Santiago, the capital of Chile.