INFINITI QX Inspiration: An electric INFINITI for the future 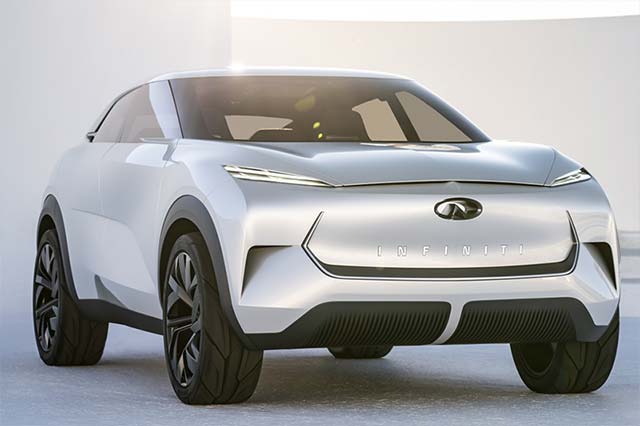 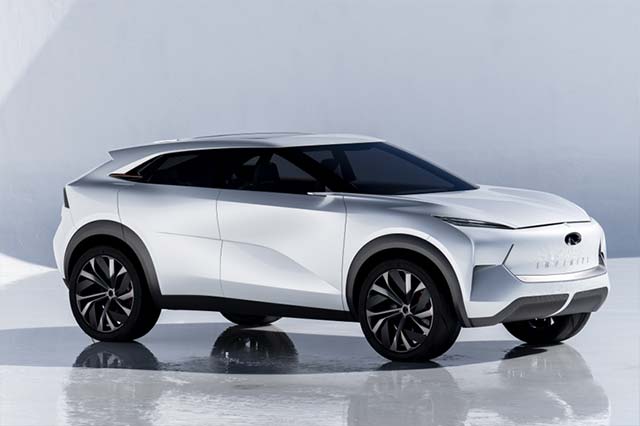 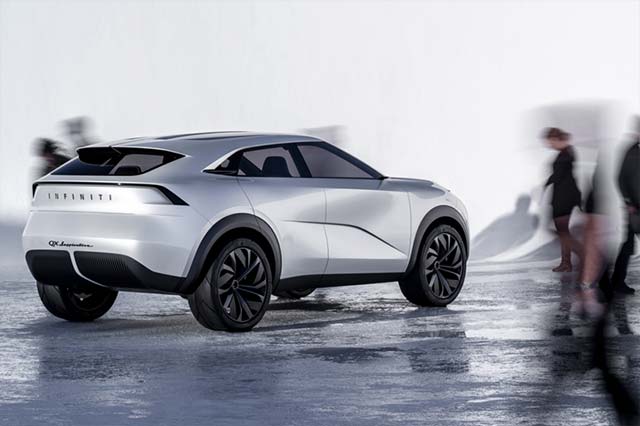 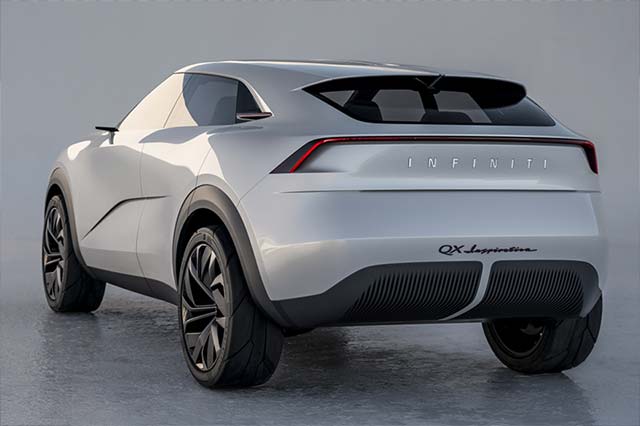 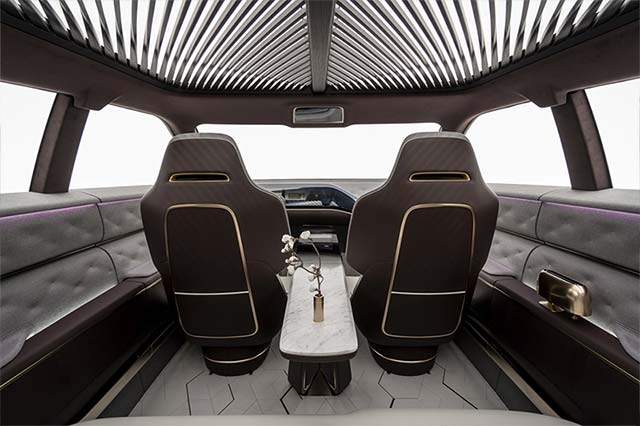 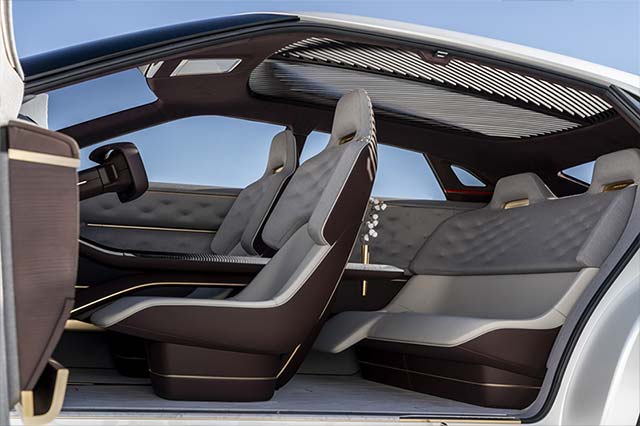 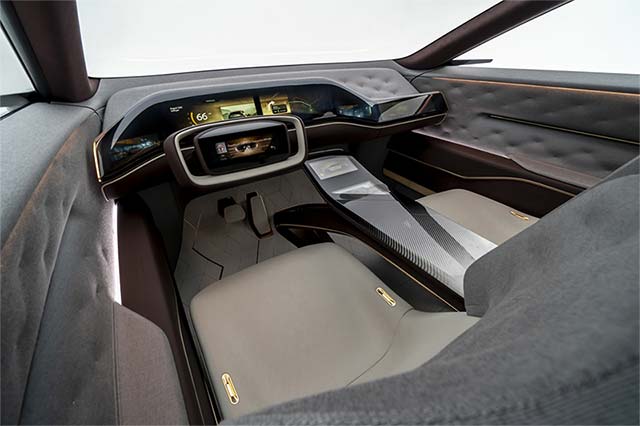 The INFINITI QX Inspiration is a mid-sized SUV concept previewing the brand’s first fully-electric vehicle. The design study previews the brand’s plan to launch a range of high-performance electrified vehicles which promise an engaging drive and deliver range confidence. The INFINITI line-up of the future will consist of a range of electric, e-POWER and performance hybrid vehicles.

The QX Inspiration signals a new era for INFINITI design enabled by technology, with a form language hinting at the potency and character of electrified powertrains. The new concept sets a direct precedent for the company’s first fully-electric production car, illustrating how new architectures and technologies are influencing modern INFINITI design. It also draws on the Japanese spatial concept of ‘Ma’, demonstrating how open spaces between lines create tension and builds anticipation.

This Japanese DNA continues into the cabin. The interior of QX Inspiration is hand-crafted using traditional techniques and a choice of materials inspired by a subtle Japanese sensuality. The development of new electrified vehicle platforms enables the creation of spacious, lounge-like interiors influenced by ‘omotenashi’, the Japanese approach to hospitality. Providing a seamlessly enabling and instinctive experience, the cabin incorporates technologies to create a welcoming environment, while assisting drivers and connecting occupants to the world around them.

The QX Inspiration concept sets a direct precedent for the brand’s first fully-electric car: a high-performance SUV offering total range confidence. Electrification is a natural next step for the company, and, as a member of the Renault-Nissan-Mitsubishi Alliance – the industry leader in low- and zero-emission vehicles – a range of ultra-low emissions technology is available to INFINITI.

INFINITI’s future models will offer drivers a mixture of fully-electric, e-POWER and performance hybrid vehicles. These powertrains will be matched with dedicated platforms and vehicle architectures, delivering the high performance, complete range confidence and low environmental impact that buyers are coming to expect from premium car manufacturers.

With the planned electrification of INFINITI’s future product portfolio, the QX Inspiration signals the brand’s intention to produce a fully-electric mid-sized SUV, based on an all-new vehicle platform which could accommodate a powerful electric all-wheel drive (e-AWD) system. The concept’s SUV packaging means the high-capacity battery pack can be located below the vehicle floor, feeding power to a pair of electric motors (one on each axle).

The future INFINITI products promise a power delivery which is instantaneous, with the e-AWD system enabling blistering off-the-line acceleration. Power is distributed intelligently between all four wheels, and the battery’s location ensures a low center of gravity, meaning the QX Inspiration inspires confidence in all situations – from high-speed corners to long-distance cruises – and weather conditions.

New form language for electrification, based on the principles of modern Japanese design and architecture.

A reference point for the new SUV concept was the 2018 Q Inspiration sedan concept, which signaled INFINITI’s first steps towards establishing a new design language characterized by straight lines, precise forms for functional elements, and clean surfaces. More technical in its design than any prior INFINITI, the Q Inspiration sedan combined simplicity with muscularity, inspired by modern powertrain technologies. Now, the 2019 QX Inspiration takes this further, echoing the sedan concept’s muscular form language while adopting certain details which first featured on the Prototype 9 and Prototype 10 design studies.

The QX Inspiration’s form language is characterized by straight lines and sudden creases, finely-balanced, smooth surfaces and organic shapes. This contrast gives the QX Inspiration a new tonality compared to earlier INFINITI designs – it is muscular, yet composed; and less overtly aggressive, yet bold in its details.

The interior of the QX Inspiration concept shows the potential for new electric vehicle platforms. Powered by a battery pack stored beneath the floor, with electric motors on each axle, there is no intrusion from driveshafts or transmission tunnels. The result is a spacious, lounge-like space, with flat floors and greater room for occupants and luggage.

The spaciousness enables the car’s human-centered ergonomics and creates a welcoming, open atmosphere that invites occupants to relax in comfort.  The cabin has a level of architectural modernity to it, with a highly structural layout that diverges from conventional automobile design. Like the exterior, the interior of the QX Inspiration draws upon INFINITI’s devotion to the Japanese spatial concept of ‘Ma’, which has meant a close consideration of the surfaces and open spaces as much the layout and design of seats, dashboard and driver controls.

Dominating the dashboard is a wide-screen monitor flowing from pillar to pillar and finished in polarized gold-tinted glass. The rectangular steering wheel, trimmed in soft brown and white leather, also features its own monitor. In place of a transmission tunnel, graceful arches, trimmed in brown leather, rise out of the floor beneath the dashboard, flowing into a Bianco Carrara marble center console which extends to the rear seats.

As seen from the outside, the headlining of the car is replaced by a unique timber louver structure, inspired by Japanese architecture. Creating pleasant indirect lighting for occupants, the sugi cedar structure casts beautiful shadows throughout the cabin as the car moves. As the individual slats twist outwards, the wood gives way to white exterior painted surfaces.

The most open surface of all, the flat floor receives its own unique treatment. Upholstered in white suede panels in a variety of rhomboid shapes, it features kintsugi gold inlays, adding an additional element of lounge design to the cabin.